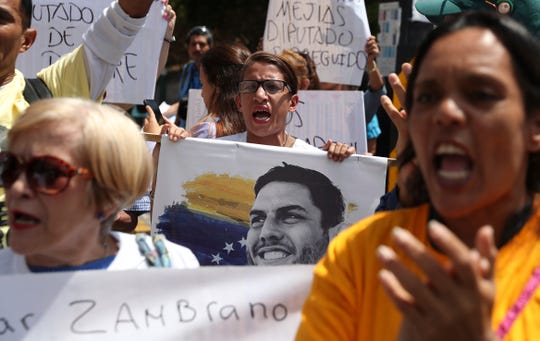 A woman holds an image of jailed opposition lawmaker and outspoken critic of President Nicolas Maduro, Juan Requesens, as she chants with others in support of the opposition controlled National Assembly, in Caracas, Venezuela, Thursday, May 16, 2019. (Photo: Martin Mejia, AP)

Caracas, Venezuela – Diplomatic efforts aimed at resolving Venezuela’s crisis accelerated on Thursday as the government and opposition sent envoys to negotiate in Norway, though the two sides’ mutual mistrust and differences on key issues could prevent any quick solution.

The envoys’ trip appeared to be primarily a mediation attempt by Norway aimed at reducing tensions that exploded into street violence when the opposition called in vain for a military uprising on April 30.

It comes amid other diplomatic efforts elsewhere: A mostly European group of nations prepared to send a high-level delegation to Venezuela, and Canadian Foreign Minister Chrystia Freeland was meeting Thursday with Cuban Foreign Minister Bruno Rodríguez in Havana.

Norway has hosted a series of secret peace talks over the years. They include the negotiations of September 1993 between Israelis and Palestinians, talks between the Philippines government and Maoist rebels in 2011, and the brokering of a 2002 cease-fire between Sri Lankan government and Tamil Tiger rebel negotiators. Seven years ago, negotiators from the Colombian government and left-wing FARC rebels held their first direct talks in a decade in Norway.

Per Wiggen, an official from Norway’s Ministry of Foreign Affairs, did not confirm planned talks in Oslo, though Norway has urged the two sides to talk since February. Minister Ine Eriksen Soereide told lawmakers on March 5 that Norway could be a mediator.

“We are in contact with both parties in Venezuela and can provide assistance if the parties wish,” she said at the time.

The myriad diplomatic efforts reflect a recognition in Venezuela that neither side has been able to prevail in the struggle for power, leaving the country in a state of political paralysis after years of hyperinflation and shortages of food and medicine.

It was a policy reversal for the opposition, which has accused Maduro of using previous negotiations to play for time.

Senior members of both sides will be involved in the discussions in Oslo, said members of Venezuela’s opposition-controlled congress who spoke on condition of anonymity because of the sensitivity of the talks. Delegations from the two opposing camps had received separate invitations from a group of Norwegians, one official said.

The representatives include Information Minister Jorge Rodríguez on the government side and Stalin González, a leading member of the National Assembly, the officials said. Without elaborating, Maduro said Rodríguez was on a “very important” mission outside Venezuela.

Meanwhile, the International Contact Group, comprising eight European nations, the European Union and four Latin American countries, is preparing a trip to Venezuela. The group formed after Juan Guaidó, the head of Venezuela’s opposition-controlled congress, declared himself interim president in January in a direct challenge to Maduro, who says his government champions the socialist principles of his predecessor, Hugo Chávez.

In Havana on Thursday, Canadian Foreign Minister Freeland said in a statement that it “is of critical importance that our two countries meet to discuss the economic, political and humanitarian crisis in Venezuela and the work we can undertake together to address it.”

The opposition has accused Cuba of propping up Maduro with military and intelligence help. Cuba has denied this. Marcelino Medina, Cuba’s First Vice Minister of Foreign Relations, was in Norway on Tuesday and Wednesday as part of what his office called a tour of Scandinavian countries.

The planned talks seemed likely to dampen speculation that the United States, the main backer of the Venezuelan opposition, might be considering military action as a way to end the crisis in the near term. U.S. officials have previously said they are focusing on diplomatic and economic measures to force out Maduro, though Guaidó said his Washington envoy would meet with the head of the U.S. Southern Command on Monday.

The opposition has insisted that Maduro was illegitimately elected last year and that he must step aside to make way for elections. Maduro, in turn, accuses the opposition of being U.S. stooges intent on illegally seizing power.

The opposition, which is backed by more than 50 nations, says Venezuela’s dire economic state is the result of years of corruption and mismanagement. Maduro, whose allies include Russia, blames the country’s problems on U.S. sanctions that were imposed more recently.