Across Iran’s capital, the talk always seems to come back to how things may get worse

Tehran, Iran — Across Iran’s capital, the talk always seems to come back to how things may get worse.

Battered by U.S. sanctions and its depreciating rial currency, Iran’s 80 million people struggle to buy meat, medicine and other staples of daily life. Now they wonder aloud about America’s intentions as it rushes an aircraft carrier and other forces to the region over a still-unexplained threat it perceives from Iran.

The Associated Press spoke to a variety of people on Tehran’s streets recently, ranging from young and old, women wearing the all-encompassing black chador to those loosely covering their hair.

Most say they believe a war will not come to the region, though they remain willing to defend their country. They think Iran should try to talk to the U.S. to help its anemic economy, even as they see President Donald Trump as an erratic and untrustworthy adversary.

Civil servant and student Afra Hamedzadeh speaks during an interview in downtown Tehran, Iran. "Trump is not predictable at all and one doesn't know how to react to him and what is the right thing to do against him,"she says. "Since he controls the global economy we are somehow left with few options." (Photo: Vahid Salemi, AP)

“Trump is not predictable at all and one doesn’t know how to react to him and what is the right thing to do against him,” said Afra Hamedzadeh, a 20-year-old civil servant and university student. “Since he controls the global economy we are somehow left with few options.”

But opinions vary across Iran’s capital, Tehran, depending on whether you speak to someone coming out of Friday prayers, in the back of a shared taxi cab, or exiting the coffee shops popular with young people.

“If America could do anything, it would have done many things by now,” said the chador-wearing Zoherh Sadeghi, a 51-year-old housewife coming out of prayers. “It can’t do anything. It can’t do a damn thing.”

“When someone keeps trying to scare you it means that they think they are not yet ready for war. When someone really wants war it starts the war right away. Like when Iraq attacked us, all of a sudden bombs were dropped,” she said. “But right now America just says, ‘I’m coming,’ to scare Iran.”

A young nation, many across Iran were alive for its bloody 1980s war with Iraq, a conflict that began when dictator Saddam Hussein invaded and dragged on for eight years. That war, in which Saddam used chemical weapons and Iran launched human wave attacks, killed 1 million people.

“I would encourage my three sons and grandsons to go to defend Iran too,” said Moghaddam, a 58-year-old welder.

Arezou Mirzaei, a 37-year-old mother of two in central Tehran, is more worried.

“I think the government should do something to avoid war,” Mirzaei said. “If war was good, then Afghanistan and Iraq would not be the mess that we see on TV.”

“I think both sides will be losers if they fight each other,” Hadavand said. “I think there are wise people on both sides to advocate peace, not war.” 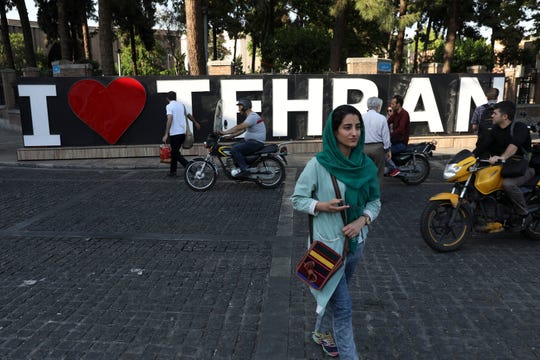 In this Saturday, May 18, 2019 photo, pedestrians and drivers make their way through a street in downtown Tehran, Iran. (Photo: Vahid Salemi, AP)

Still, many pointed to the economy, not the possible outbreak of war, as Iran’s major concern. Iran’s rial currency traded at 32,000 to $1 at the time of the 2015 nuclear deal. Now it is at 148,000, and many have seen their life’s savings wiped out.

Nationwide, the unemployment rate is 12 percent. For youth it’s even worse, with a quarter of all young people unemployed, according to Iran’s statistic center.

“The economic situation is very bad, very bad. Unemployment is very high, and those who had jobs have lost theirs,” said Sadeghi, the housewife. “Young people can’t find good jobs, or get married, or become independent.”