Osaka, Japan – World leaders attending a Group of 20 summit in Japan that began Friday are clashing over values that have served for decades as the foundation of their cooperation as they face calls to fend off threats to economic growth.

“A free and open economy is the basis for peace and prosperity,” Japanese Prime Minister Shinzo Abe told his counterparts in opening the two-day G-20 meeting, which comes as leaders grapple with profound tensions over trade, globalization and the collapsing nuclear deal with Iran. 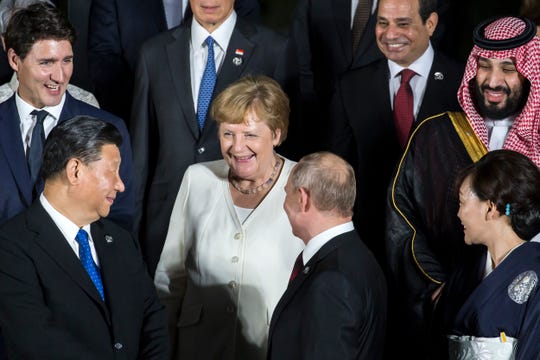 While groups like the G-20 endeavor to forge consensus on broad policy approaches and geopolitical issues, they also are divided on an array of issues.

Defying Chinese warnings not to bring up the issue of recent protests in Hong Kong, Abe told Chinese President Xi Jinping it was important for “a free and open Hong Kong to prosper under ‘one country, two systems’ policy,” Japanese officials said, referring to the arrangement for the former British colony’s autonomy when China took control in 1997.

They said Abe reminded Xi of the importance of guaranteeing freedom, human rights, the “rule of law” and other universal values in raising concern over proposed Hong Kong legislation that would allow some criminal suspects to be extradited for trial in mainland China. The bill, now shelved, prompted protests by hundreds of thousands of Hong Kong residents and minor demonstrations elsewhere in Asia, including Osaka.

Xi is not the only leader facing a pushback from his Western counterparts.

European Union Council President Donald Tusk blasted Russian President Vladimir Putin for saying in an interview with the Financial Times newspaper that liberalism was “obsolete” and conflicts with the “overwhelming majority” in many countries.

“We are here as Europeans also to firmly and unequivocally defend and promote liberal democracy,” Tusk told reporters. “What I find really obsolete are: authoritarianism, personality cults, the rule of oligarchs. Even if sometimes they may seem effective.”

In the interview, Putin praised President Donald Trump for his efforts to try to stop the flow of migrants and drugs from Mexico and said that liberalism “presupposes that nothing needs to be done. That migrants can kill, plunder and rape with impunity because their rights as migrants have to be protected.”

Trump has at times found himself at odds with other leaders in such international events.

Putin, Xi and Indian Prime Minister Narendra Modi met and agreed on the need to rely on international law, respect national sovereignty and refrain from interference in the internal affairs of other nations, Putin said.