N. Korea says talks with U.S. could resume in a ‘few weeks’

N. Korea says talks with U.S. could resume in a ‘few weeks’

Seoul, South Korea – North Korea said Monday that diplomatic talks with the United States could resume in a “few weeks,” but that it will not consider abandoning its nuclear weapons unless external threats are fully removed.

A statement Monday attributed to a North Korean foreign ministry official said potential upcoming working-level talks would be decisive in determining the fate of the country’s diplomacy with Washington. It called for unspecified U.S. security and economic concessions, saying the discussions of North Korea’s denuclearization will only be possible when “threats and hurdles endangering our system security and obstructing our development are clearly removed beyond all doubt.” 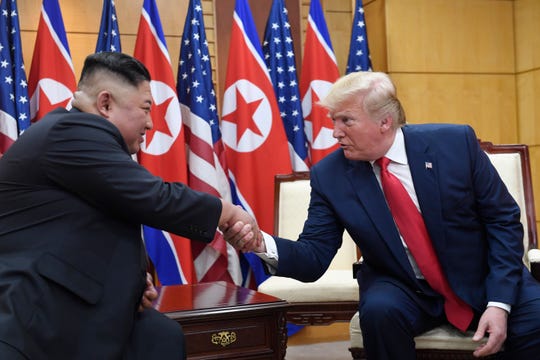 “Whether the DPRK-U.S. negotiations will be a window for chance or an occasion to precipitate crisis is entirely up to the U.S.,” the statement said, referring to North Korea by its formal name, the Democratic People’s Republic of Korea.

Negotiations have stalled since a February summit between North Korean leader Kim Jong Un and President Donald Trump in Hanoi, Vietnam, collapsed over disagreements over sanctions relief in exchange for disarmament measures.

The North has since expressed its displeasure through belligerent rhetoric and a flurry of short-range weapons tests that experts see as an attempt to dial up pressure on the U.S. and South Korea and build leverage ahead of talks.

In a meeting with senior aides on Monday, South Korean President Moon Jae-in, who lobbied hard to set up the first meeting between Kim and Trump in June last year, said working-level negotiations between Washington and Pyongyang would resume “soon,” but didn’t offer specifics, including when or where.

North Korea has cut off virtually all diplomatic activity with the South amid the stalemate in nuclear negotiations while demanding that Seoul break away from Washington and restart inter-Korean economic projects held back by U.S.-led sanctions against the North.

“Our government will serve whatever role and do whatever it can to stabilize peace on the Korean Peninsula,” Moon said.

Last Monday, North Korean First Vice Foreign Minister Choe Son Hui said that the North is willing to resume nuclear diplomacy in late September but that Washington must come to the negotiating table with acceptable new proposals. She said if the proposals don’t satisfy North Korea, dealings between the two countries may end.

Choe’s offer for talks came hours before Kim supervised a testing-firing of what state media has described as a “super-large” multiple rocket launcher system. It was one of four new short-range weapons systems the North unveiled in recent weeks that experts say could potentially expand the country’s ability to strike targets throughout South Korea, including U.S. bases there.