Macron has called for calm on France’s annual heritage weekend, as authorities in Paris prepare to deploy thousands of police to protect landmarks

Paris – French President Emmanuel Macron has called for calm on France’s annual heritage weekend, as authorities in Paris prepare to deploy thousands of police to protect landmarks and government buildings.

His call comes as an array of protesters plan to descend on the capital and other cities. Unions, environmental activists and yellow vest supporters are all set to make their grievances known.

“I appeal to everyone that it takes place sensibly, in common agreement and with calm, so that our youngest can visit the buildings… and fellow citizens can fully enjoy these days of heritage,” Macron told reporters on Friday evening on the sidelines of a visit to painter Rosa Bonheur’s house. 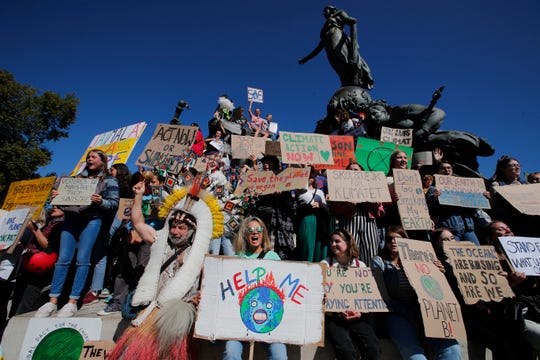 Youths gather at Nation square at the start of a climate demonstration Friday, Sept. 20, 2019 in Paris. In Canberra and Kabul, Cape Town and Berlin, and across the globe, hundreds of thousands of people took the streets Friday to demand that leaders tackle climate change in the run-up to a U.N. summit. (Photo: Francois Mori, AP)

But beyond the heritage weekend, where French authorities open up cultural sites all around the country to the public, authorities are also wary that the weekend could provide a moment for yellow vest supporters to revive their flagging movement against economic injustice .

The hard-left Workers’ Force union is holding a separate march against the retirement reform Saturday, amid concerns it will require people to work longer and reduce pensions.

Climate activists meanwhile are also demonstrating Saturday in Paris to demand more action from the government and companies to reduce emissions and save the burning Amazon rainforest and the melting Arctic.