France has been trying to find a diplomatic solution to U.S.-Iranian tensions

United Nations – France’s top diplomat said Sunday the most pressing issue following attacks on key Saudi Arabian oil installations is not a potential meeting between the leaders of the United States and Iran but whether it’s possible to de-escalate the current “dangerous” situation. —

Foreign Minister Jean-Yves Le Drian told a news conference that Iran’s decision to violate the 2015 nuclear deal on three occasions recently was also a factor in increasing tensions. Iran has said it is responding to escalating U.S. sanctions following the Trump administration’s withdrawal from the agreement and its difficulties doing business internationally. 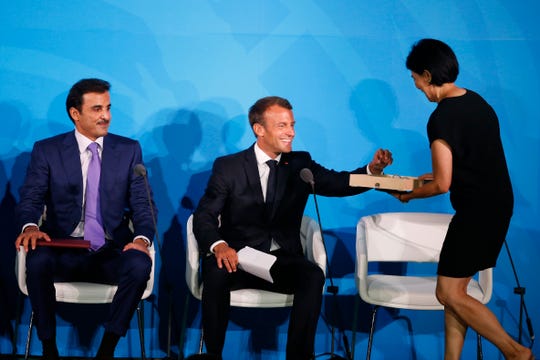 “We expect Iran to go back to full compliance because weakening the accord would only increase the risk of conflicts due to the issue of a nuclear Iran,” said Le Drian.

France has been trying to find a diplomatic solution to U.S.-Iranian tensions, and there has been speculation that French President Emmanuel Macron was trying to arrange a meeting while U.S. President Donald Trump and Iranian President Hassan Rouhani are in New York for the annual gathering of world leaders at the U.N. General Assembly.

But Le Drian’s comments indicated that was no longer a priority.

The foreign minister said that at last month’s summit of the seven major industrialized nations in the French resort of Biarritz that “there was scope for discussions aiming at a positive outcome.”

“The logic was for Iran to return to compliance” with the 2015 nuclear deal, he said. “That meant giving up on new measures, some financial facilities to enable dialogue to continue, and the opening up of negotiations on post-2025 nuclear issues as well as overall regional security.”

But today, Le Drian said, “there is less space” given Iran’s violations of the nuclear agreement as well as the Sept. 14 attacks against Saudi Arabia which are “definitely a game-changer.”

He reiterated that the claim of responsibility for the attacks by Yemen’s Houthi Shiite rebels is “hardly credible.” But he said France welcomed Saudi Arabia’s decision to call in U.N. and French experts and the government will wait for their findings.

The U.S. has alleged Iran was behind the attacks; Iran has denied involvement.

“What is at stake during this week is whether or not we can carry on with this de-escalation process,” Le Drian said.

“As to a meeting between President Trump and President Rouhani, this is not the No. 1 issue,” he said. “The first thing is whether or not we can get back to de-escalation – and how – and it is the message that both the president and myself will be sending to our counterparts this week.”

On other global crises, Le Drian said Italy and France will chair a ministerial meeting on Libya on Thursday aimed at a cease-fire and the launching of a political process leading to elections and a new constitution.

In Syria, Le Drian said, “the fight against terror remains our main priority,” with the aim of eradicating terrorist networks and ensuring accountability for those responsible for terrorist acts. He said he will be attending a meeting on this issue Thursday sponsored by Iraq and the Netherlands.

In Africa’s troubled Sahel region, he said France and Germany are supporting a meeting before the end of the year on a partnership for security, stability and economic development “to bring new momentum” to the region.