London — Angry and despairing British lawmakers accused Prime Minister Boris Johnson on Thursday of whipping up violence and division with his charged language about opponents of Brexit, and the speaker of the House of Commons pleaded for an end to the “toxic” atmosphere.

But government and Parliament remained at loggerheads, as lawmakers rejected a request to adjourn for a week so that Johnson’s Conservatives can attend the governing party’s annual conference. 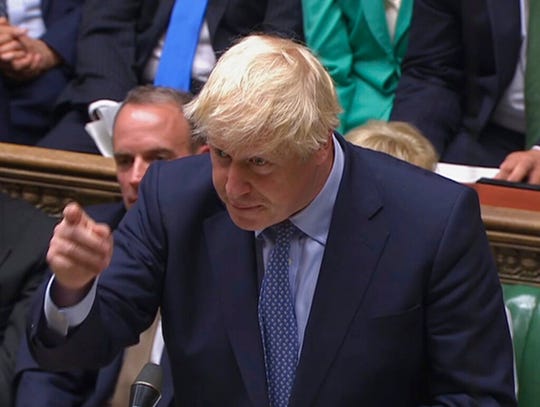 The 306-289 vote makes it harder for Tory legislators to take part in the four-day gathering that starts Sunday in Manchester. The conference usually sees speeches from senior government officials, including the prime minister.

It was the latest sign of the mistrust and animosity that have consumed British politics since the country narrowly voted in 2016 to leave the European Union. Three years later, Britain and its politicians remain bitterly divided over how, or whether, to leave the 28-nation bloc.

In a raucous, ill-tempered parliamentary debate on Wednesday, Johnson referred to an opposition law ordering a Brexit delay as the “Surrender Act” and the “Humiliation Bill,” and he said postponing the country’s departure would “betray” the people. He also brushed off concerns that his forceful language might endanger legislators as “humbug.”

Johnson took power two months ago with a “do-or-die” promise that Britain will leave the EU on the scheduled date of Oct. 31, with or without a separation agreement outlining commercial relations with the Continent. His foes are determined to avoid a no-deal exit, which economists say would disrupt trade with the EU and plunge Britain into recession.

Opponents accused the prime minister of fomenting hatred with his populist, people-versus-politicians rhetoric.

“We can see what the prime minister was doing with that horrendous, divisive language yesterday,” Labour Party lawmaker Lisa Nandy said Thursday. “We can see that this is a clear electoral strategy to whip up hate and try to divide us, and to whip up the hate of people against Parliament.”

Some lawmakers warned Johnson to be more cautious, citing the 2016 killing of lawmaker Jo Cox. The Labour member of Parliament, who campaigned to stay in the EU, was shot and stabbed a week before Britain’s EU membership referendum by a far-right attacker shouting, “Death to traitors!”

Labour lawmaker Paula Sherriff brought up the assassination — and the death threats many legislators still face — and implored the prime minister to stop using “pejorative” language. Johnson caused an uproar when he replied: “I’ve never heard such humbug in all my life.”

On Thursday, the prime minister said that “tempers need to come down and people need to come together,” but he offered no apology and defended his use of the term “Surrender Bill.”

He also told the BBC: “I totally deplore any threats to anybody, particularly female MPs, and a lot of work is being done to stop that and give people the security that they need.”

Since the Brexit referendum drove a wedge through British politics and society, several people have been convicted of threatening politicians, and a neo-Nazi was found guilty of plotting to kill a Labour legislator.

Another Labour lawmaker, Jess Phillips, said a man was arrested outside her constituency office on Thursday after trying to smash the windows and shouting, “Fascist!”

Ellie Cooper, daughter of prominent Labour legislator Yvette Cooper, said on Twitter that since Cox’s slaying, she has been “scared every single day” that the same thing would happen to her mother.

“Boris Johnson, take a stand. It’s your job to unite the country. Or you will be responsible for putting other people’s lives at risk,” she wrote.