“Any foreign forces operating in our territories without our authorization are occupying forces and should withdraw immediately,” Foreign Minister Walid al-Moallem said

United Nations – Syria’s top diplomat on Saturday demanded the immediate withdrawal of American and Turkish forces from the country and said his government reserves the right to defend its territory in any way necessary if they remain.

Foreign Minister Walid al-Moallem’s remarks to the United Nations General Assembly were made as Turkey and the United States press ahead with a deal to create a safe zone along Syria’s border with Turkey. 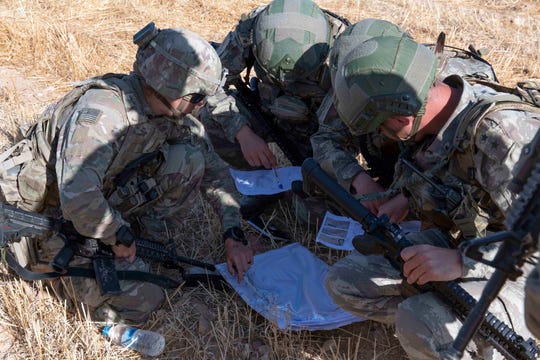 U.S. and Turkish military forces go over a map in preparation of their second joint ground patrol inside the so-called "safe zone" in northeast Syria near the border with Turkey on Sept. 24. (Photo: Staff Sgt. Andrew Goedl, AP)

On the political front, he reaffirmed the government’s support for the recently agreed committee to draft a new constitution for the country. As has been the government’s tone since the start of the 2011 uprising in Syria, the foreign minister took a hard line, stressing there must be no interference from any country or timeline imposed on the process.

Al-Moallem’s speech highlighted the enormous challenges to achieve reconciliation in Syria, where over 400,000 people have been killed during the conflict and millions more have fled.

The more than eight-year conflict has also drawn numerous foreign militaries and thousands of foreign fighters to Syria, many to support the now-defeated Islamic State extremist group and others still there backing the opposition and battling government forces.

“The United States and Turkey maintain an illegal military presence in northern Syria,” al-Moallem said. “Any foreign forces operating in our territories without our authorization are occupying forces and should withdraw immediately.”

If they refuse, he said, “we have the right to take any and all countermeasures authorized under international law.”

There are around 1,000 U.S. troops in Syria on a mission to combat Islamic State militants. The United States also backs and supports Kurdish groups in the northeast that are opposed to the Syrian government and have fought against Sunni extremist groups.

U.S. President Donald Trump had said he wants to bring the troops home, but military officials have advocated a phased approach.

Al-Moallem described Turkey and the United States as “arrogant to the point of holding discussions and reaching agreements on the creation of a so-called ‘safe zone’ inside Syria” as if it was on their own soil. He said any agreement without the consent of the Syrian government is rejected.

The deal between the U.S. and Turkey keeps U.S.-backed Syrian Kurdish fighters, considered terrorists by Turkey, away from Syria’s northeastern border with Turkey. It involves an area five to 14 kilometers deep (three to eight miles), as well as the removal of heavy weapons from a 20-kilometer-deep zone (12 miles). The length of the zone has not yet been agreed to by both parties but will likely stretch hundreds of kilometers.

Most of Syria is now under the control of the Syrian government, which is backed by Russia and Iran. However, Syrian rebels and extremists still hold Idlib in the northwest, and U.S-backed Kurdish groups hold parts of the oil-rich northeast.

The Syrian government maintains that Idlib remains a hotbed for “terrorists” and al-Moallem vowed that its “war against terrorism” will continue “until rooting out the last remaining terrorist.”

In a breakthrough on the political front, earlier this week U.N. Secretary General Antonio Guterres announced the formation of the committee that would draft Syria’s new constitution, which he said could be an important step toward ending the war.

The U.N. chief announced Saturday that the committee will meet for the first time in Geneva on Oct. 30. Its rules state that a new constitution will be followed by “free and fair elections under United Nations supervision.”

The committee was authorized at a Russian-hosted Syrian peace conference in January 2018, but it took nearly 20 months for the sides to agree on the 150 members – particularly on a 50-member civil society of experts, independents, tribal leaders and women to serve alongside 50 members from the government and 50 members from the opposition. The U.N. was authorized to put together the civil society list but the choices faced objections, mainly from the Syrian government.

Under the newly announced terms, the “Syrian-led and Syrian-owned” committee, with U.N. envoy Geir Pedersen as facilitator, will amend the current 2012 constitution or draft a new one.

Al-Moallem stressed that the committee will operate without preconditions, its recommendations must be made independently, and “no deadlines or timetables must be imposed on the committee.”

On another long-simmering dispute, al-Moallem accused Israel of starting “another phase of escalation” through its repeated attacks on Syrian territory and the territory of other neighboring countries.

He stressed that “it is a delusion” to think that the Syrian conflict would force the government to forfeit its “inalienable right” to recover the Golan Heights which Israel captured during the June 1967 war. The annexation is not recognized under international law.

The Trump administration in March signed a proclamation recognizing Israel’s sovereignty over the Golan Heights, reversing more than a half-century of U.S. policy in the Middle East. He also moved the U.S. Embassy to Jerusalem in recognition of Israel’s claims of the city as its capital.

“It is a delusion,” al-Moallem stressed, “to think that the decisions of the U.S. administration on the sovereignty over the Golan would alter historical and geographical facts or the provisions of international law.”

“The Golan has been and will forever be part of Syria,” he said.