Madrid – Spain’s Socialist government says it will exhume and relocate the remains of dictator Gen. Francisco Franco on Thursday, bringing closer to an end a move that has sparked much criticism and legal battles.

The government received court clearance last month to take the remains from the grandiose mausoleum at the Valley of the Fallen complex outside Madrid and move them to a cemetery close to the capital where the Franco family has a crypt. Franco’s wife, Carmen Polo, was buried there in 1988. 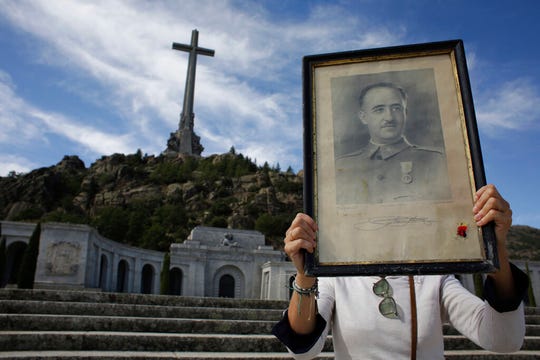 In this Friday, Oct. 4, 2019 photo, a visitors holds a portrait of former Spanish dictator Francisco Franco at the Valley of the Fallen mausoleum near El Escorial, outskirts of Madrid, Spain. (Photo: Alfonso Ruiz, AP)

The government said it will begin the exhumation operation at 10:30 a.m. (0830 GMT) Thursday with the presence of 22 relatives of Franco, including his seven grandchildren.

Some of the relatives will hand-carry the casket with Franco’s body for nearly 300 meters, out to a square where the cameras of Spain’s public broadcaster will capture how it’s placed in a vehicle, the government said.

Franco ruled Spain between 1939 and 1975 after he led a rebellion against the Spanish democratic government in 1936 that started the Spanish Civil War. 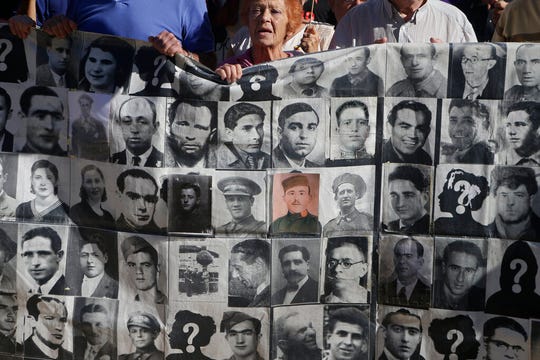 The government’s plan is to transport the remains over the 35-kilometer (21-mile) distance from the mausoleum to the cemetery by helicopter, although a separate plan has been worked out to move them by land if heavy fog or wind impedes the flight.

Spanish authorities said the operation will be a private affair, with a small religious ceremony at the Valley of the Fallen and a private mass held at the family crypt in the Mingorrubio cemetery.

The priest son of Antonio Tejero, a Spanish Civil Guard general who attempted a coup d’etat in 1981, has been chosen by Franco’s family for the mass, the government said.

The media will be able to witness it only from outside, where Franco supporters have called for protests. 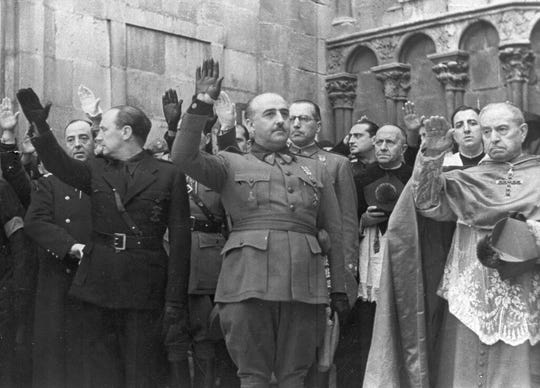 The procedure was authorized after the Supreme Court recently dismissed objections by Franco’s family, ending months of delays.

The interim government is pushing ahead with the exhumation before Spain holds a general election on Nov. 10, in which acting Prime Minister Pedro Sánchez hopes to regain the full powers of his office. 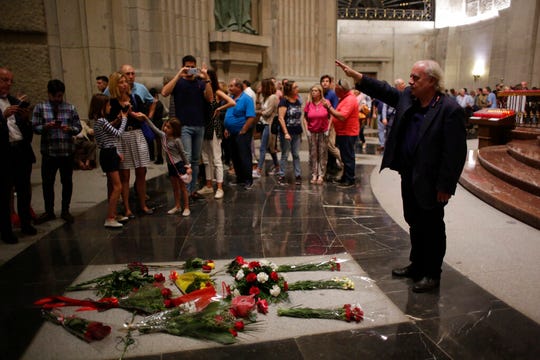 In this Saturday, Oct. 5, 2019 photo, a man makes the fascist salute at the tomb of Jose Antonio Primo de Rivera, the founder of the Spanish right-wing movement La Falange, inside the basilica at the Valley of the Fallen monument near El Escorial, outside Madrid. (Photo: Alfonso Ruiz, AP)

For many years, thousands of people commemorated the anniversaries of Franco’s Nov. 20, 1975 death in Madrid. And although Franco’s popularity has waned immensely, the exhumation has been criticized by the dictator’s relatives, Spain’s three main right-wing parties and some members of the Catholic Church for opening the country’s old political wounds.

The exhumation follows a 2007 Historical Memory Law that aimed to seek redress for the estimated 100,000 Franco victims who are buried in unmarked graves, including thousands at the Valley of the Fallen. The law prohibited keeping Franco’s remains in a place that exalted him as a political figure.