Lima, Peru – Authorities in Peru have charged five men in the timber industry with the 2014 murders of four indigenous activists who had battled illegal logging in the Amazon jungle.

Two timber executives and three loggers have been charged with the shooting deaths of the activists, prosecutor Otoniel Jara, who works in Peru’s remote Ucayali region, told The Associated Press on Wednesday.

Environmentalists say the case is unprecedented in Peru, where years of illegal logging and, on occasion, suspected attacks by those carrying it out have often been met with an ineffectual response from authorities. 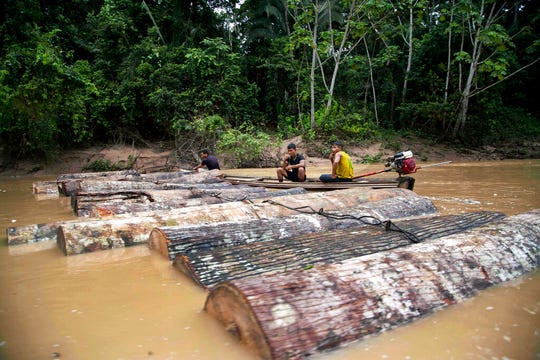 In this March 17, 2015 file photo, Ashaninka Indian men, identified by locals as illegal loggers, tie tree trunks together to move them along the Putaya River near the hamlet of Saweto, Peru. Authorities in Peru said on Thursday, Oct. 31, 2019, that they have charged five men in the timber industry with homicide in the deaths of indigenous activists who had battled illegal logging in their remote Amazon jungle homeland. (Photo: Martin Mejia, AP, File)

“We hope that the legacy of the victims of this massacre can lead to justice,” said Tom Bewick, of Rainforest Foundation US, a group that funded efforts to bring the alleged killers to justice.

Bewick said he hoped the case will “set an example for other indigenous environmental defenders across the world.”

Authorities say the men were killed with shotgun blasts in the Upper Tamaya-Saweto Asháninka indigenous territory along Peru’s border with Brazil.

The activists had defended the forests, travelling by canoe for three days to the regional capital city, Pucallpa, to file complaints and urge forestry officials to take action. They urged prosecutors to stop illegal logging, presenting photos and sketches they made of destruction they found.

Prosecutors say the five suspects could face up to 35 years in jail if convicted. Timber executives José Estrada and Hugo Soria are accused of ordering the killings, which were allegedly carried out by loggers Eurico Mapes, Josimar Atachi and Segundo Atachi.

The Associated Press was not immediately able to reach the suspects or their attorneys for comment.

During the five-year investigation, the men have publicly denied the charges. They remain free and are believed to be living in the remote jungles of Peru.

Jara, the prosecutor, said prosecutors who were assigned to the case before him had abandoned it.

Jara said the three loggers had been in the area where the bodies were found, while the two businessmen had lost revenue after the indigenous activists accused them of illegal logging.

On one occasion, Estrada, one of the timber executives, allegedly referred to Chota, telling witnesses: “I’ll pay whatever… I want his head,” according to documents filed by prosecutors.

The bodies of Chota and Quintisima were found, while those of Rios and Pinedo are still missing.

Global Witness, an organization that investigates corruption and environmental abuse, has said 164 environmentalists were killed worldwide in 2018. About half were killed in Latin American nations including Brazil, Chile, Colombia, and Guatemala.

Mauro Pío, an indigenous environmental leader who sought to protect Peru’s Amazon region, was shot dead in 2013. No suspects have been charged.

Relatives of the four Peruvian activists killed in 2014 say the jungle territory of their community remains vulnerable. But they welcomed the charges, hoping it signals a shift toward more robust protections for indigenous groups.

“This is good,” said Asháninka Diana Ríos, daughter of Jorge Ríos, one of the murdered activists. “This is not going to be filed away and forgotten.”