Mexican officials and experts don’t fear that Trump will send killer drones into Mexico. Such drone strikes have been a mainstay of U.S. anti-terror operations in Pakistan and Afghanistan, but nobody thinks they would be launched into Mexico. 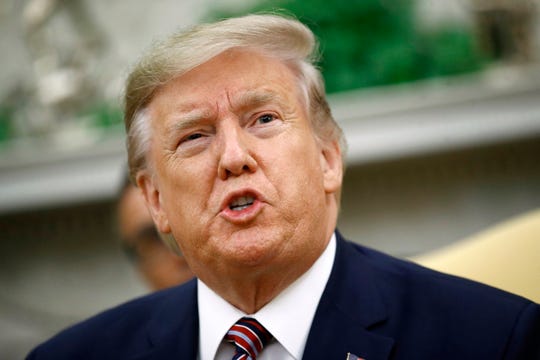 What Mexicans do fear a terrorism designation could send bilateral relations back into the dark days of the 1990s, when annual U.S. certifications of Mexico’s anti-drug efforts became a regular source of friction.

The possibility of U.S. sanctions and aid reductions constantly loomed over Mexico between 1987 and 2002, when the certification process was weakened to a less threatening form. Mexico was faced with loss of aid or access to international financing, as well as possible trade, visa and banking sanctions.

“Every time, those procedures made cooperation with the United States tremendously more difficult,” noted Mexico City security analyst Alejandro Hope. “This sends us back to all that.”

“When your only tool is a hammer, everything looks like a nail,” Sarukhan wrote.

Hope noted that a terror-group designation would only encourage those who want to militarize the U.S.-Mexico border or build a wall along it, something Mexico has hotly opposed.

“This reinforces and gives ammunition to those who want to describe Mexico as a failed state, and describe the border as a security risk, and want to treat narcoterrorism and immigrations as twin issues,” said Hope. “This is part of a broader agenda.”

On a more visceral level, Mexicans reacted angrily to the potential terrorism designation Wednesday, arguing it would violate the country’s sovereignty.

It didn’t help that the designation was suggested by a community of dual U.S.-Mexican nationals, the extended LeBaron and Langford families, who live in religious communities in northern Mexico.

Despite the decades-old Mexican roots of the self-described Mormon communities – and the fact that drug cartel gunmen slaughtered three women and six children from the communities in early November – some Mexican social media users described the LeBarons as traitors to Mexico.

One of the top three trending topics on Mexican Twitter accounts Wednesday was “LeBaronOutOfMexico”; another top hashtag was “LeBaronTraitors”.

Alex LeBaron chuckled and said, “Probably not everybody in my community expected it, but I did.”

LeBaron wrote in his Twitter account, in Spanish “We are not asking for an ‘invasion,’ because we are already invaded by terrorist (drug) cartels in Mexican territory,” adding “we demand real coordination between both countries!”

The communities, which are not affiliated with The Church of Jesus Christ of Latter-day Saints, have long stressed their love of Mexico – where many were born – and note that Mexicans suffer the brunt of cartel violence.

In that sense, LeBaron wrote that the United States should do more to cooperate with Mexico to stop the flow of illegal U.S. weapons into Mexico, and reduce U.S. demand for illegal drugs that line the pockets of traffickers.

But he suggested that if many Mexicans were so worried about sovereignty, they should study the case of the northern city of Culiacan, where Sinaloa cartel gunmen forced the Mexican army to back down and free the captured son of drug lord Joaquin “El Chapo” Guzman on Oct. 17.

“Sovereignty? Go to Culiacan and see who is in charge there!” he wrote.