Civil defense officials in Nuevo Leon state said Gobright fell about 300 yards to his death. His body was recovered Thursday

Mexico City – California rock climber Brad Gobright reportedly reached the top of a highly challenging rock face in northern Mexico and was rappelling down with a companion when he fell to his death.

Climber Aidan Jacobson of Phoenix, Arizona, told Outside magazine he was with Gobright, and said they had just performed an ascent of the Sendero Luminoso route in the El Potrero Chico area near the northern city of Monterrey. Jacobson also fell, but a shorter distance, after something went wrong in the “simul-rappelling” descent, the magazine said.

The technique involves two climbers balancing each other’s weight off an anchor point. In online forums, many climbers described the technique as difficult and potentially dangerous. 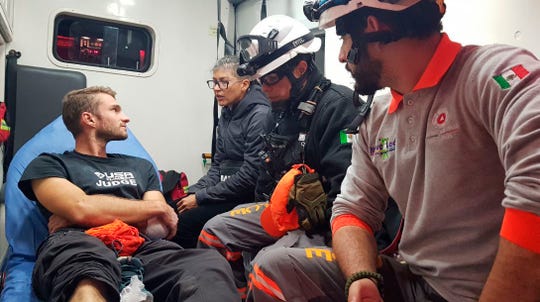 Aidan Jacobson sits inside an ambulance after he was rescued after falling from the El Potrero Chico peak in Hidalgo, Mexico. Jacobson was climbing with California free solo climber Brad Gobright who died in the fall. (Photo: AP)

His body was recovered Thursday. The publication Rock and Ice described Gobright as “one of the most accomplished free solo climbers in the world.”

Friends on Friday described him as a dedicated climber who would travel the West Coast, living out of his Honda Civic, following the weather on a diet of gas station food.

“In some ways, I think he was such a fixture of the climbing community and such a big character on the scene, I feel like I’ve always known him,” said his friend Alex Honnold, who was the first person to ascent Yosemite National Park’s granite wall known as El Capitan without ropes or safety gear.

“He spent almost every day of his life doing exactly what he wanted to be doing.”

Jacobson said the pair might not have evened out the length of the 80-meter (88-yard) rope between them, to ensure each had the same amount, because Gobright’s end was apparently tangled in some bushes near a ledge below them.

That might have caused Gobright to essentially run out of rope; without the balancing weight of the other climber, both would fall. Jacobson fell through some vegetation and onto a ledge they were aiming for, injuring his ankle.

Honnold said he’d often climb with Gobright as they discussed weighty topics such as the rise of China and would trade books about the evolution of humankind.

“He was just interested in the world,” Honnold said.

Samuel Crossley, a climber and photographer, said he first met Gobright about three years ago while filming “Safety Third,” a film chronicling Gobright’s life as a free solo climber.

Crossley said Gobright took the photographer’s needs and perspective into his climbs, taking direction well so they could make good photographs during sunrise or sunset that would become some of Crossley’s favorites.

Despite being an elite climber, Crossley said Gobright enjoyed living out of his sedan, noting other elite climbers lived out of vans.

“Brad was Brad, that was the beauty of it,” Crossley said. When you’re hanging out with Brad, you’re typically climbing and having a good time.”