Three summits, several praise-filled letters and many months later, the U.S. finds itself back in familiar waters with North Korea

Seoul, South Korea – When President Donald Trump agreed to met North Korean leader Kim Jong Un in 2018, flying in the face of all past precedent and protocol, both Koreas jumped at what appeared to be the biggest opportunity in decades to shake up the situation on the Korean peninsula. 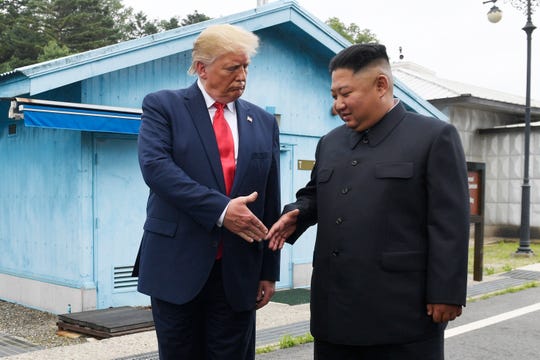 After all, for 25 years, U.S.-led efforts to curtail North Korea’s nuclear ambitions had been seemingly stuck in a cycle of provocation, panic, attempts at diplomacy with simultaneous hand-wringing about the wisdom of it, and the subsequent unraveling of the fruits of those efforts. Each go-around ended with increased U.S. skepticism about engagement, followed by years of impasse during which North Korea would surprise the world by making strides in its development of nuclear weapons and powerful missiles to deliver them.

Trump’s willingness to flout all that came before him was welcomed by the leaders of North and South Korea. After his first summit with Trump in Singapore, North Korea’s Kim praised the U.S. president’s “unique approach”; a couple months later, South Korean president Moon Jae-in told Trump he was “the only person who can solve this problem.”

Trump himself also touted the idea that he was singularly positioned to reach a breakthrough with North Korea.

“People said, ‘Trump is crazy,’” he told reporters at a Rose Garden news conference in February, ahead of his second meeting with Kim. “And you know what it ended up being? A very good relationship. … Nobody else would have done that.”

Three summits, several praise-filled letters and many months later, the U.S. finds itself back in familiar waters with North Korea.

After a hiatus, North Korea has returned to regular testing of ballistic missiles, firing off more than a dozen rounds of short-range missiles this year. It has turned a cold shoulder to entreaties from U.S. negotiators to engage in working-level talks on the details of a potential agreement, and to all outreach by South Korea. In increasingly ominous pronouncements in state media, North Korean leaders have warned the U.S. has until year’s end to come up with a new proposal for a resumption of nuclear talks. Analysts, negotiators and military officials in the U.S. and South Korea are bracing for renewed military provocation from the North in coming days.

Stephen Biegun, the chief U.S. negotiator, during a visit to South Korea this month urged North Korea to “seize this moment,” calling it a “window of opportunity.” “We are here and you know how to reach us,” he said – a plea that fell on deaf ears.

The current stalemate in some ways harks back to Clinton’s second term, when a 1994 nuclear freeze-for-energy assistance deal teetered amid U.S. suspicions that North Korea was cheating, and North Korea accusing the U.S. of not holding up its end of the bargain for delays in aid. In 1998, North Korea fired off its first ballistic missile over Japan as Washington was preoccupied in the midst of an impeachment and negotiators were deadlocked.

In a speech in Seoul last month, Robert Carlin, who was then an adviser in the State Department on negotiations with North Korea, quoted a memo from the time, saying it could just as well describe the situation today as it did in October 1998.

“The situation on the Korean peninsula is rapidly deteriorating. It could become extremely dangerous within a few months. Once the present structure of agreements and negotiations collapses, there are few if any safe exits and no safety nets,” Stanford political scientist John Lewis wrote at the time, Carlin noted.

In a flurry of diplomatic efforts to save the deal in the final days of his administration, Clinton weighed visiting Pyongyang to finalize the agreement at the eager invitation of Kim Jong Il – the current Kim’s father – but decided against it. The Bush administration, with John Bolton as undersecretary of state for arms control, scrapped the deal with the nation it had newly termed part of the “axis of evil,” and started at square one.

“We are no longer interested in such talks that bring nothing to us,” Kim Kye Gwan, a North Korean foreign ministry advisor, said in a statement last month, according to state media. “As we have got nothing in return, we will no longer gift the U.S. president with something he can boast of.”

Before Trump, diplomats and negotiators would have met for days or weeks on end to work out an agreement before the leaders would even consider meeting. In agreeing to meet with Kim on the spot, and putting out-sized emphasis on his own role in the talks, Trump turned that process on its head, setting in motion a summit before any details about what the two men would agreed to were discussed by their respective staff.

The four-paragraph agreement in Singapore last June was, as a result, without teeth, with North Korea only vaguely pledging that it “commits to work toward complete denuclearization of the Korean Peninsula” – far less than it had agreed to in 1994. This February’s second summit in Hanoi was hamstrung by the same problem, with both sides discovering only after traveling thousands of miles, with hordes of international media eagerly awaiting, that their positions were too far apart to be bridged in one afternoon.

The impromptu meeting at the DMZ between the two Koreas this summer, again, yielded myriad photos and proclamations of history being made, and little by way of concrete steps or agreements to curtail North Korea’s nuclear program, improve relations and communication and lessen the threat of military conflict on the peninsula.

Each time, when U.S. negotiators tried to follow up to talk specifics, they said they were rebuffed.

Carlin, of Stanford, said he was concerned Kim had since written off diplomacy with Trump and would make a bold move to signal as much, miscalculating the potential U.S. response with rapid escalation the result.

“Kim looks like he’s made completely new decisions that have been in place for months,” he said. With the U.S. focused on the Senate impeachment trial into the new year, he said, “my concern is that he figures this is an open road. You have to hope that he doesn’t lunge into something stupid.”

David C. Kang, director of the University of Southern California’s Korean Studies Institute, said despite the fanfare surrounding the summits, Trump’s approach to North Korea was ultimately not all that different from that of his predecessors – that North Korea must give up its nuclear program in its entirety first, before the U.S. will agree to sanctions relief or normalized relations.

“Isn’t that the definition of insanity, doing the same thing and expecting a different result?” he said. “The idea that somehow North Korea is going to be scared into backing down, that little bit of more pressure and they’ll crack, is false.”

In the meantime, experts say North Korea continues to add to its nuclear arsenal, producing fissile material for 10 additional bombs in the last 18 months for a total of about 40, according to Siegfried Hecker, a Stanford nuclear scientist who has visited North Korea to inspect its plutonium enrichment facilities.

“The longer the United States waits, the more the overall nuclear threat will grow,” he wrote in September on the site 38 North. “The dialogue will need to get past its herky-jerky phase and, through a series of smaller steps, create the momentum crucial to overcoming inevitable bumps in the difficult road ahead.”

Trump, for his part, says he continues to have faith in Kim. Earlier this month, Trump tweeted: “He does not want to void his special relationship with the President of the United States or interfere with the U.S. Presidential Election in November.”

Kang said North Korea had already proved itself inured to the various economic sanctions placed on the country for its weapons and nuclear testing. Kim doesn’t have an upcoming election or term limits; if he doesn’t get a deal he wants with the current U.S. president, he can wait for the next.

“This regime has found many, many ways to survive,” he said. “Time has been on North Korea’s side forever.”