The plane had taken off from Imam Khomeini International Airport. The crash is suspected to have been caused by mechanical issues

Shahedshahr, Iran – A Ukrainian airliner carrying 176 people crashed on the outskirts of Tehran during a takeoff attempt Wednesday hours after Iran launched its missile attack on U.S. forces, scattering flaming debris and passengers’ belongings across farmland and killing everyone on board.

The Iranian military disputed any suggestion the plane had been blown out of the sky by a missile, and Iranian aviation authorities said they suspected a mechanical problem brought down the 3½-year-old Boeing 737. Ukrainian officials initially agreed but later backed away and declined to offer a cause while the investigation is going on. 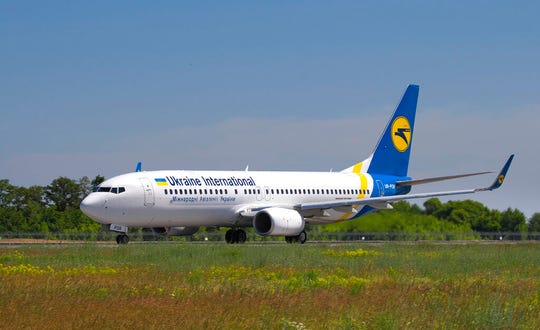 In this photo taken on Saturday, May 26, 2018, showing the actual Ukrainian Boeing 737-800 UR-PSR plane that crashed Wednesday Jan. 8, 2020, on the outskirts of Tehran, Iran, seen here as it waits to takeoff at Borispil international airport outside Kyiv, Ukraine. This Ukrainian airplane carrying 176 people crashed on Wednesday shortly after takeoff from Tehran's main airport, killing all onboard, Iranian state TV and officials in Ukraine said. (Photo: Oleg Belyakov, AP)

The Ukraine International Airlines jet was en route to the Ukrainian capital of Kyiv with 167 passengers and nine crew members from several countries, including 82 Iranians, at least 63 Canadians and 11 Ukrainians, according to officials.

Many of the passengers were believed to be international students attending universities in Canada; they were making their way back to Toronto by way of Kyiv after visiting with family during the winter break. The manifest included several teenagers and children, some as young as 1 or 2.

Ukraine’s President Volodymyr Zelenskiy cut short a visit to Oman to return to Kyiv and said a team of Ukrainian experts would go to Tehran to help investigate the crash.

“Our priority is to find the truth and everyone responsible for the tragedy,” he wrote in a Facebook statement.

In Canada, where the crash ranked among the worst losses of life for Canadians in an aviation disaster, the flag over Parliament in Ottawa was lowered to half-staff, and Prime Minister Justin Trudeau said the country is “shocked and saddened.” He vowed the government will work to “ensure that this crash is thoroughly investigated and that Canadians’ questions are answered.”

Major world airlines Wednesday rerouted flights crossing the Middle East to avoid danger amid escalating tensions between the U.S. and Iran, and the U.S. Federal Aviation Administration barred American flights from certain Persian Gulf airspace, warning of the “potential for miscalculation or misidentification” of civilian aircraft.

The plane had been delayed from taking off from Tehran’s Imam Khomeini International Airport by almost an hour. It never made it above 8,000 feet, crashing just minutes after takeoff, according to data from the flight-tracking website FlightRadar24.

Qassem Biniaz, a spokesman for Iran’s Road and Transportation Ministry, said it appeared a fire erupted in one of its engines and the pilot lost control of the plane, according to the state-run IRNA news agency. The news report did not explain how Iranian authorities knew that. 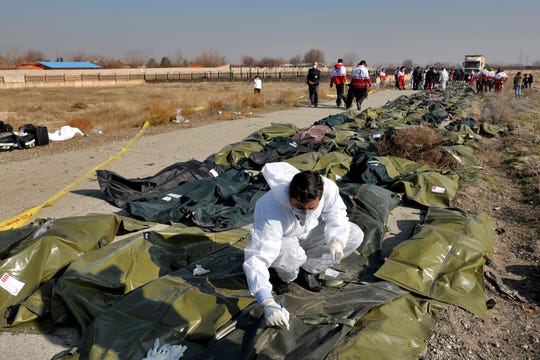 A forensic investigator works at the scene of a Ukrainian plane crash as bodies of the victims are collected, in Shahedshahr, southwest of the capital Tehran, Iran, Wednesday, Jan. 8, 2020. (Photo: Ebrahim Noroozi, AP)

The pilot apparently couldn’t communicate with air-traffic controllers in Tehran in the last moments of the flight, said Hassan Razaeifar, the head of the air crash investigation committee. He did not elaborate.

Ukraine International Airlines President Yevhen Dykhne, said the aircraft “was one of the best planes we had, with an amazing, reliable crew.” In a statement, the airline went further, saying: “Given the crew’s experience, error probability is minimal. We do not even consider such a chance.”

Gen. Abolfazl Shekarchi, spokesman for the Iranian armed forces, was quoted by the semiofficial Fars news agency as denying the plane has been brought down by a missile.

“The rumors about the plane are completely false and no military or political expert has confirmed it,” he said. He said the rumors were “psychological warfare” by the government’s opponents.

Authorities said they found the plane’s so-called black boxes, which record cockpit conversations and instrument data. But it was not immediately clear how much access to the information the Iranians would allow.

Aviation experts were skeptical about Iran’s initial claim that the plane was brought down by a mechanical problem.

“I don’t see how they would have known that so quickly,” said John Hansman, an aeronautics professor at MIT. “They hadn’t had time to look at the flight data recorder. They probably hadn’t had time to investigate the physical wreckage of the engines. How do you know it was a mechanical issue versus a surface-to-air missile that went in the engine?”

Many planes have systems that send huge amounts of technical data, including potential problems with the engines or other key systems, to the airline and the manufacturer. But it was unclear whether Ukraine International had paid to download that information automatically during flights, or how much data from such a short flight would tell.

A Boeing spokesman declined to say whether the company obtained any information about the jet during its ill-fated flight.

In 1988, a U.S. Navy cruiser mistakenly shot down an Iranian passenger jet over the Persian Gulf, killing 290 people. Earlier this week, Iranian President Hassan Rouhani referred to that episode in responding to President Donald Trump’s threat to attack 52 targets in Iran.

“Those who refer to the number 52 should also remember the number 290,” Rouhani tweeted. “Never threaten the Iranian nation.”

The Ukrainian plane, fully loaded with fuel for its 2,300-kilometer (1,430-mile) flight, slammed into the ground near the town of Shahedshahr, causing fires that lit up the darkened fields before dawn.

Din Mohammad Qassemi said he had been watching the news about the Iranian missile attack on U.S. troops in Iraq in revenge for the killing of Gen. Qassem Soleimani when he heard the crash.

“I heard a massive explosion and all the houses started to shake. There was fire everywhere,” he said. “At first I thought (the Americans) have hit here with missiles and went in the basement as a shelter. After a while, I went out and saw a plane has crashed over there. Body parts were lying around everywhere.”

The crash left a wide field of debris scattered across farmland, the dead lying among pieces of the shattered aircraft. Their possessions, including a child’s cartoon-covered electric toothbrush, a stuffed animal, luggage and electronics, stretched everywhere.

Rescuers in masks shouted over the noise of hovering helicopters. They quickly realized there would be no survivors.

This was the first fatal crash involving Ukraine International Airlines, which began flying in 1992, according to the Aviation Safety Network, which tracks accidents.

As for the Boeing 737-800 model that went down, it an extremely common twin-engine jetliner introduced in the late 1990s, with thousands in use around the world, and has one of the best safety records among popular airliners.

The Aviation Safety Network said there have been eight fatal crashes involving the Boeing 737-800 out of nearly 5,000 built. A FlyDubai crash in Russia in 2016 killed 62 people, and an Air India Express disaster in India in 2010 left more than 150 dead.

The 737-800s have been the subject of inspections and repairs since last year, after airlines started reporting cracks in a part that keeps the wings attached to the fuselage.

The jet that went down on Wednesday last underwent routine maintenance on Monday, the airline said.

While the cause of the tragedy remained unknown, the disaster could further damage Boeing’s reputation, which has been battered by furor over two deadly crashes involving the new Boeing 737 Max, which has been grounded for nearly 10 months.

Boeing extended condolences to the victims’ families and said it stands ready to assist. Boeing, like other airline manufacturers, typically helps in crash investigations. But that effort could be thwarted in this case by the U.S. sanctions imposed against Iran since Trump withdrew the United States from the 2015 nuclear deal.