Guatemala president says no deal to send Mexicans there

Outgoing Guatemalan President Jimmy Morales said Wednesday his government had not agreed to receive Mexicans who had sought asylum in the U.S.

Guatemala president says no deal to send Mexicans there

Guatemala City – Outgoing Guatemalan President Jimmy Morales said Wednesday his government had not agreed to receive Mexicans who had sought asylum in the U.S.

Morales, whose presidency ends next week, said he had told U.S. officials that would have to be negotiated with his successor. 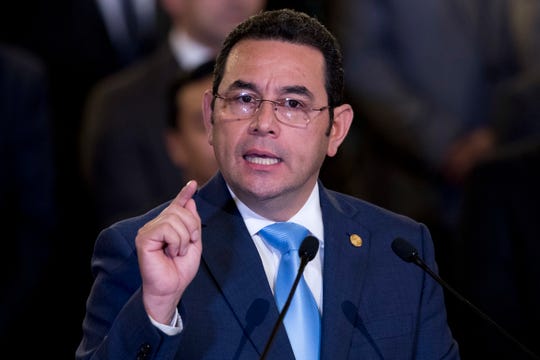 “It’s more than clear, in the agreement it only lays out Salvadorans and Hondurans,” Morales said. “The United States has talked about the possibility of including Mexican nationals, but that they have to discuss it with the next government. In the last visit we made to the White House with President Trump we were clear saying that that negotiation had to be done with the new government.”

The U.S. government had moved aggressively last year to curb the number of asylum seekers arriving at its southwest border. The majority came from Central America. The U.S. began making many of those requesting asylum wait out their cases in Mexico. Then it forged agreements with Guatemala, Honduras and El Salvador that would allow it to send some asylum seekers there. The U.S. government argued that migrants should request asylum in the first country they entered, not wait until they arrived at the U.S. border.

To date, the U.S. has sent 94 asylum seekers from El Salvador and Honduras to Guatemala. Only six of them decided to seek asylum there while the rest returned to their countries.

Mexicans do not pass through any other countries to arrive at the U.S. border. But in recent days, guidance was sent to U.S. asylum officials that said Mexicans would now be included under the bilateral agreement with Guatemala.

Pedro Brolo, who has been designated foreign affairs minister by President-elect Alejandro Giammattei, and his spokeswoman did not immediately answer requests for comment.

On Dec. 19, Morales’ interior minister, Enrique Degenhart, suggested that talks were underway to expand the program to Mexicans because it had yielded such strong results with Central Americans.

Mexico has expressed its unhappiness with the plan. Mexican Interior Secretary Olga Sánchez Cordero said via Twitter Tuesday night that “it would be an action contrary to international law and the bilateral relationship.”