Netanyahu vowed to “make history” as Trump unveils of the U.S. administration’s much-anticipated plan to resolve the Israeli-Palestinian conflict

But the high-profile meeting in Washington looks set to serve mostly as a sideshow to the two allied leaders’ serious legal problems. The Palestinians have not been consulted on the much-trumpeted deal and have pre-emptively rejected the U.S. proposal.

The Trump-Netanyahu meeting on Tuesday comes as Trump’s impeachment trial continues in the U.S. Senate and the Israeli Parliament holds a hearing to discuss Netanyahu’s request for immunity from criminal corruption charges. For both men, their White House summit will be a welcome diversion. 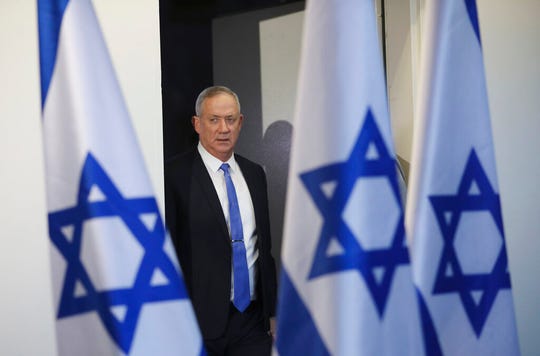 In this Nov. 20, 2019, file photo, Blue and White party leader Benny Gantz arrives to address media in Tel Aviv, Israel. A blueprint the White House is rolling out to resolve the decades-long conflict between the Israelis and Palestinians is as much about politics as it is about peace. President Donald Trump said he would likely release his long-awaited Mideast peace plan a little before he meets Tuesday with Israeli Prime Minister Benjamin Netanyahu and his main political rival Benny Gantz. (Photo: Oded Balilty, AP, File)

Netanyahu said he suggested inviting Gantz in a show of unity ahead of a momentous occasion. But late Saturday, Gantz, fearing Netanyahu would use the meeting as an electoral ploy to upstage him, said he would travel to Washington on his own and meet Trump separately. Gantz, a former commander of the Israeli military, will then rush back to Israel for the immunity proceedings in Parliament.

Before taking off Sunday, Netanyahu made no mention of his legal woes. Instead, he said the friendly Trump administration was providing Israel a once-in-a-lifetime opportunity that must be seized.

“We are in the midst of very dramatic political events, but the peak is still ahead,” he said. “I am going to Washington with a great sense of purpose, great responsibility and great chance, and I am hopeful we can make history.”

The plan is expected to be very favorable to Israel, and appears to have little chance of success. The Palestinians, claiming the White House is unfairly biased toward Israel, have already said they won’t accept the plan.

On Sunday, the Palestinian Authority’s Foreign Ministry called for a “clear international declaration” rejecting the plan.

“No single Palestinian would accept this plan, and the Palestinian leadership will defeat it as they have done with similar plans,” said Nabil Abu Rdeneh, spokesman for President Mahmoud Abbas.

The U.S.-sponsored Mideast deal nonetheless could give a lift to Netanyahu, who is running in his third race for re-election in less than a year.

After two inconclusive elections last year, Netanyahu and Gantz are engaged in a tight race ahead of the March 2 vote that once again is seen as a referendum on the long-time Israeli leader.

Gantz has focused his campaign on Netanyahu’s legal problems, saying he is unfit for office. Netanyahu has sought to portray himself as a global statesman uniquely qualified to lead Israel through difficult times. He’s tried to use his close friendship with Trump as a strategic asset.

Two meetings with the president – on Monday and Tuesday – play into Netanyahu’s narrative. It is unclear whether this will benefit him at the ballot box. Trump delivered political favors to Netanyahu during the previous two races as well, only to see his friend fall short of victory.

But Trump’s “Deal of the Century” could give Netanyahu more than anything he has received before. Israeli media reports have said it will offer unprecedented gifts to the hard-line Netanyahu.

“For better or for worse, the announcement of the deal – both its timing and its political ramifications – is a huge achievement for Netanyahu,” wrote Nahum Barnea, a leading Israeli columnist. “Time will tell whether it is his lifeline or his swan song.”

Netanyahu was charged in November with fraud, breach of trust and accepting bribes in three cases involving accepting gifts from billionaire friends and trading political and regulatory favors for positive news coverage. Gantz’s centrist Blue and White party refuses to sit with him in government because of the charges, but has been careful not to scare off his voters by veering too far left.

Gantz’s decision to travel to Washington separately reflected his need to remain on good terms with Trump while keeping his distance from Netanyahu.

In two election rounds neither has been able to secure a required parliamentary majority without the other’s support. Each is seeking a knock-out punch in the upcoming third round.

Netanyahu has been reeling and is expected to lose his request for immunity, setting up a potential criminal trial down the road. The sudden invite to the White House, with an appealing peace proposal to market to the public, delivered him a much-needed boost. Leading Israeli opposition figures have accused Trump of intervening in their domestic politics.

Netanyahu has been flirting with plans to annex the Jordan Valley as well as Jewish settlements across the West Bank. Such a move would be popular with his nationalist Israeli base but could also essentially extinguish any hope of creating a viable Palestinian state, while risking a new explosion of Palestinian unrest. According to Israeli reports, the Trump plan is expected to deliver much of what Netanyahu wants without asking much in return.

The Palestinians seek the West Bank, which was captured by Israel in 1967, as the heartland of a future independent state and east Jerusalem as their capital. Most of the international community supports their position, but Trump has reversed decades of U.S. foreign policy by siding more blatantly with Israel. The centerpiece of his strategy was recognizing Jerusalem as Israel’s capital and moving the U.S. Embassy there in 2018.

Trump’s Israel policies have proven popular among the president’s evangelical and pro-Israel supporters. They could also give him a boost from his base as the U.S. Senate weighs whether to remove him from office after he was impeached last month, and as he gears up for a reelection battle this year.

“Immediately after news of the (peace) plan was reported, it became plainly evident based on the reactions that this wasn’t a Trump plan, but a Bibi-Trump plot,” wrote Israeli columnist Ben-Dror Yemini, using Netanyahu’s nickname.