Mainz, Germany – The heads and bodies are gigantic, the subjects are world leaders, and the creations are irresistible to look at.

All of these oversized figures are coming together for a provocative parade at the traditional Mainz carnival celebrations in western Germany. 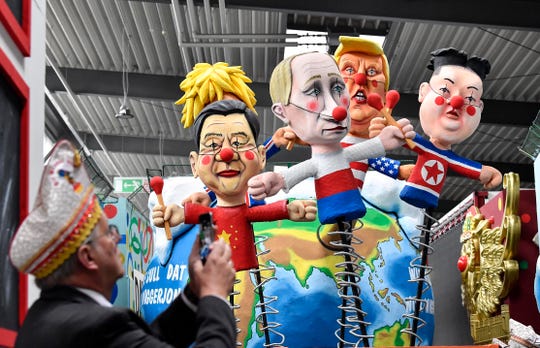 The Mainzer Carnival Association presented the colorful figures for a first glimpse Tuesday before they will entertain the crowds on top of floats next week in the traditional Shrove Monday street parade.

Mainz, Cologne and Duesseldorf, Germany’s three big cities along the Rhine River, are all famous for their politically provocative floats. During Carnival, dubbed the “fifth season of the year” before the start of Christian season of Lent, the common people are traditionally allowed to make fun of those in power.

The famous Carnival street parades, which travel for kilometers (miles) through the cities, will include not only the floats, but also dozens of brass bands, dancing groups and “Carnivalists” who throw tons of candy to revelers in the streets.