Ontario to close all non-essential businesses

Ontario to close all non-essential businesses

Toronto – Canada’s most populous province said Monday that non-essential businesses must close for at least 14 days starting at 11:59 p.m. Tuesday in efforts to stem the new coronavirus pandemic.

Ontario Premier Doug Ford said he will release the list of businesses that will be allowed to stay open, but food will remain on the grocery store shelves and people will still have access to medication.

Ford also acknowledged students will not going back to school on April 6, the date initially set for a return to classes. 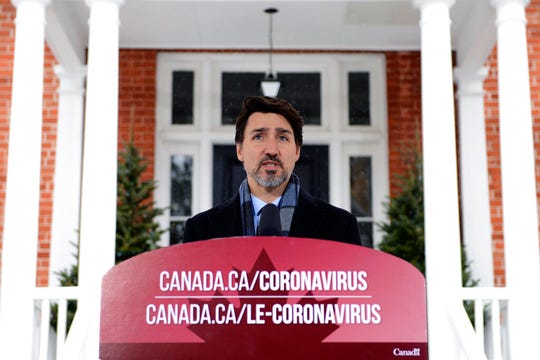 Prime Minister Justin Trudeau addresses Canadians on the COVID-19 situation from Rideau Cottage in Ottawa on Monday, March 23, 2020. Trudeau says "enough is enough. Go home and stay home." Trudeau says staying at home is a duty and the government will enforce it if necessary. (Photo: Sean Kilpatrick, AP)

Trudeau said staying at home is a duty and said the government will enforce it if necessary. He said those who are not doing their part are putting at risk everyone else, including the eventual recovery of the economy and the well-being of millions of Canadians.

He called images of people out enjoying the sunshine in large groups “extremely concerning.”

Trudeau also endorsed the decision by the Canadian Olympic Committee to not send athletes to the Tokyo Olympics unless they’re postponed for a year.

A health care worker screens people in their vehicle at a COVID-19 test clinic in Montreal on Monday, March 23, 2020. (Photo: Paul Chiasson, AP)

Trudeau made the comments outside his residence while in self isolation after his wife tested positive for the virus.

The prime minister so far resisted the idea of putting into place the federal equivalent, the Emergencies Act, saying Monday that since it requires taking power out of the hands of the provinces, there needs to be a discussion with them first.

Canada had at least 1 ,560 confirmed cases and more than 20 deaths as of Monday.