More than 387,000 people worldwide have been infected by the new coronavirus and more than 16,700 have died

This summer’s Tokyo Olympics fell victim to the coronavirus crisis Tuesday as the death toll mounted rapidly in Europe and the United States, while U.S. lawmakers closed in on a nearly $2 trillion deal to blunt the outbreak’s economic damage.

Around the globe, India, with a population of 1.3 billion, ordered the biggest lockdown in the world. Corpses piled up in Spain. And New York braced for what the governor warned could be a “bullet train” of infections that could overwhelm hospitals.

The International Olympic Committee postponed the Olympics until 2021 at the recommendation of Japan’s prime minister, adding the games to the long roster of sports events disrupted by the epidemic. 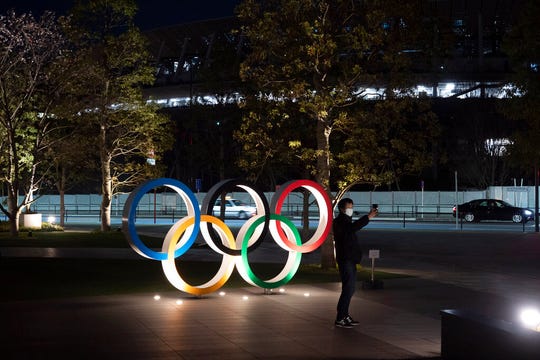 A man takes a selfie with the Olympic rings in front of the New National Stadium in Tokyo, Tuesday, March 24, 2020. IOC President Thomas Bach has agreed "100%" to a proposal of postponing the Tokyo Olympics for about one year until 2021 because of the coronavirus outbreak, Japanese Prime Minister Shinzo Abe said Tuesday. (Photo: Jae C. Hong, AP)

In Washington, top congressional and White House officials said they expected to reach a deal during the day on a package to shore up businesses and send relief checks to ordinary Americans of $1,200 per person or $3,000 for a family of four.

Stocks rallied around the world on the news, with the Dow Jones Industrial Average surging more than 1,300 points, or over 7 percent, in the morning.

President Donald Trump tweeted: “Congress must approve the deal, without all of the nonsense, today. The longer it takes, the harder it will be to start up our economy.”

Spain registered a record one-day increase of nearly 6,600 new infections and a leap of about 500 in the death toll to almost 2,700.

The country started storing bodies in an ice rink converted to a morgue until they could be buried or cremated. Also, army troops disinfecting nursing homes discovered elderly people living amid the corpses of suspected coronavirus victims. Prosecutors opened an investigation.

In the U.S., the number of infections topped 46,000, with about 600 dead, and hospitals braced for an onslaught of patients and pleaded for vital supplies such as masks and mechanical ventilators.

In New York, now one of the globe’s virus hot spots, authorities rushed to set up thousands of hospital beds for potential victims in the city of 8.4 million people. But the number of cases is doubling every three days, threatening to swamp the city’s intensive care units in the weeks ahead, Gov. Andrew Cuomo said. New York State recorded more than 200 deaths, or one-third of the U.S. total.

Cuomo proposed that the country send thousands of ventilators to New York City – the metropolitan area needs 30,000 of them, he said – and then rush them to where they are needed next as the epidemic moves on.

“One of the forecasters said we were looking at a freight train coming across the country,” the governor said. “We’re now looking at a bullet train.”

In Geneva, World Health Organization spokeswoman Margaret Harris cited a “glimmer of hope” in hard-hit Italy after two days of slight declines in the number of new cases and deaths. The outbreak has killed more than 6,000 Italians – the highest death toll of any country, even China – and pushed the health system there to the breaking point.

“These are crucial days. Woe to whoever lets down the guard,’’ Health Minister Roberto Speranza said about the declining numbers. ”Now, more than ever, the commitment of everyone is needed.”

Nearly 400,000 people worldwide have been infected by the coronavirus and more than 17,000 have died, according to a running tally kept by Johns Hopkins University.

In a distinct shift in the crisis, some 85% of new infections are coming from Europe and the United States. In fact, Chinese authorities said they would finally end the two-month lockdown in hard-hit Hubei province, where the outbreak first began.

Harris said cases around the world are expected to increase “considerably.”

“Just to put it in proportion: It took two years in the worst Ebola outbreak we ever had, the West African outbreak, to reach 11,000 deaths,” the WHO spokeswoman said.

In Britain, confusion rippled through the country on the first morning after Prime Minister Boris Johnson ordered a three-week halt to all nonessential activity.

The government told most stores to close, banned gatherings of three or more people and said everyone apart from essential workers should leave home only to buy food and medicine or to exercise. But photos showed crowded trains on some London subway lines.

For most people, the virus causes only mild or moderate symptoms, such as fever or coughing. But for some older adults and people with existing health problems, it can cause more severe illness, including pneumonia. More than 101,000 people have recovered.

As health care workers worked around the clock, they also struggled with scarce supplies.

“All over the country, you see examples of workers inventing homemade suits using plastics,” said Olga Mediano, a lung specialist at a hospital in Guadalajara, a city outside Madrid. “The protective suits are fundamental because without health workers we won’t be able to do anything.”

Amid the spiking numbers in Spain, relatives of elderly people and retirement-home workers expressed fear over the crisis.

“We live in anguish. We have no information whatsoever,” said Esther Navarro, whose 97-year-old Alzheimer’s-stricken mother is at a home in Madrid where coronavirus cases have been identified.

The postponement of the games could be a heavy economic blow to Japan and could present a host of logistical challenges, including the need to maintain the sports venues for another year.

It also upsets the training regimens of athletes who had hoped to be in peak form this summer, and could even cost some of them their shot at the Olympics.

Still, the decision met with relief from athletes.

“A huge decision but I think the right one for sure,” British sprinter Adam Gemili said on Twitter. “Time to regain, look after each other during this difficult period and go again when the time is right!”

Elsewhere around the world, Indian Prime Minister Narendra Modi decreed a “total lockdown” of the country for 21 days. India, with one-sixth of the world’s population, has reported about 500 cases.

“To save India and every Indian, there will be a total ban on venturing out of your homes,” Modi said, adding that if the county fails to manage the next 21 days, it will be set back by 21 years.

Pakistan ordered its railways shut down as infections climbed past 900.

The Philippine Congress approved a bill declaring a national emergency and authorizing President Rodrigo Duterte to launch a massive aid program and tap private hospitals and ships to help as the virus outbreak starts to take hold in the Pacific nation, which reported more than 550 cases.

In contrast to other European countries, Germany offered some hope that it has flattened the exponential spread of the virus, which has infected some 30,000 people. The death toll was relatively low at about 130, and Germany has even taken in patients from France and Italy for treatment.

Rising reported from Berlin. Associated Press reporters around the world contributed to this report.