Easing up: US and Europe grapple with when to reopen schools

Easing up: US and Europe grapple with when to reopen schools

Paris – The question of when to reopen schools looms large as European countries and U.S. states draw up plans to restart their battered economies.

Despite alarm among some teachers, parents and mayors, France detailed plans Tuesday to start opening schools on May 11, with limits on class size and rules requiring face masks. Hard-hit Italy intends to keep schools closed until September. And in the U.S., where President Donald Trump said states should seriously consider resuming classes before the end of the academic year, dozens have said it would be unsafe for students to return until the summer or the fall.

Elsewhere around the world, the virus appeared all but vanquished in New Zealand. Australia opened the beach in Sydney. Brazil was emerging as a new hot spot for infections. And new doubts were raised over whether Japan will be able to host the already postponed Summer Olympics next year without the development of a vaccine. 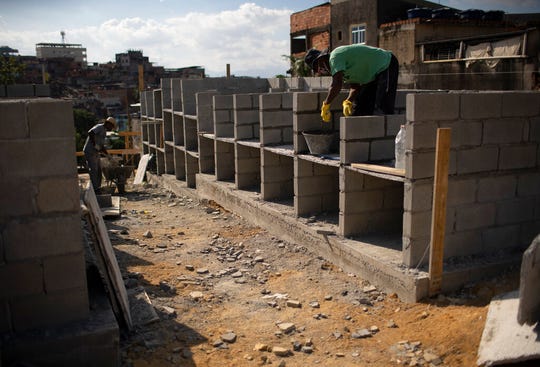 Germany, widely praised for its handling of the outbreak there, reported an uptick in the infection rate since some small businesses were allowed to reopen just over a week ago. But it was too soon to say whether the easing of the restrictions was to blame.

The number of confirmed infections worldwide stood at more than 3 million – including 1 million in the U.S. – and the confirmed global death toll topped 210,000, according to Johns Hopkins University. The true toll is believed to be much higher because of limited testing, differences in counting the dead and government concealment.

Italy, Spain, France and Britain accounted for more than 21,000 virus-related deaths each, while the U.S. recorded more than 57,000, the highest in the world.

This April 9, 2020, photo released by Kara Illig shows her daughter, Ainslie Illig, 8, on her computer in Ebensburg, Pa. The frustration of parents is mounting as more families across the U.S. cope with weeks of total distance learning. (Photo: Kara Illig, AP, File)

Although the coronavirus seems to affect children far less seriously than adults, many officials, teachers and parents are concerned about the health risks that school openings could pose.

Some point to the difficulties of ensuring that children stick to social distancing and frequent hand washing, and to the dangers for teachers.

But many parents would struggle to return to work without schools being open, hampering efforts to counter the world’s deep economic slump.

French Prime Minister Edouard Philippe announced that elementary schools will reopen May 11 and high schools May 18. He said all high school students will have to wear masks, and class sizes will be capped at 15.

Joel Wilmotte, mayor of the French town of Hautmont, went on Facebook to list seven reasons he is not ready to open the schools, including ill-equipped teachers and cleaning staff and opposition from parents.

Greek Prime Minister Kyriakos Mitsotakis outlined his government’s plan for a gradual lifting of the lockdown there, saying high school seniors will restart classes on May 11, followed a week later by students in lower grades. Elementary schools and kindergartens will remain closed, and might open on June 1 “only if we are absolutely certain that the course of the epidemic is waning,” he said.

In Italy, the decision to keep the schools closed until the fall could make it harder for parents to return to work. Typically grandparents in Italy are fallback baby sitters, but they are now off-limits because they are vulnerable to the virus.

Emer McCarthy, who works in the Vatican’s child protection office, tweeted that Italian Premier Giuseppe Conte had addressed a lockdown exit “for everyone except Italy’s children. Incredible. No mention of schools, childcare options, nothing. But football yes. #ChildrenNotSeenNotHeard.”

In Germany, where the virus has claimed about 6,000 lives, Lothar Wieler, the head of the Robert Koch Institute, said the number of people infected by every person with COVID-19 has risen from 0.7 before the lockdowns were eased to a still manageable 0.96.

Wieler urged Germans to keep abiding by social distancing, wearing masks while on public transportation or shopping and staying at home when possible.

“There may still be some smoldering ashes out there, and they have the potential to become a wildfire again, if we give them the chance,” she said, quoting a microbiologist.

Her government loosened its lockdown, which had shuttered schools and most businesses. Surfers hit the waves at dawn, builders returned to construction sites and baristas fired up espresso machines. 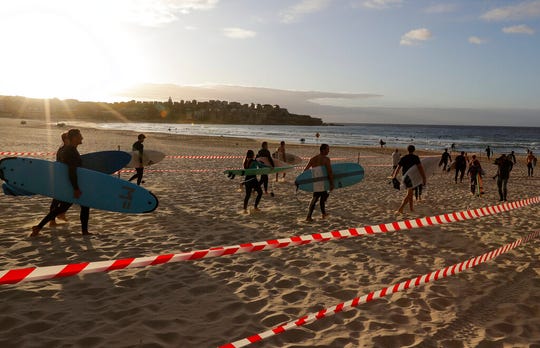 Surfers prepare to enter the water at Bondi Beach in Sydney, Tuesday, April 28, 2020, as coronavirus pandemic restrictions are eased. The beach is open to swimmers and surfers to exercise only. (Photo: Rick Rycroft, AP)

In Australia, hundreds returned to the water after Sydney’s iconic Bondi Beach reopened to swimmers and surfers. Still, people can use the beach only during daylight and must keep their distance from one another. Australia has recorded 83 virus deaths, fewer than what most U.S. states have reported.

But the virus is still a long-term foe. The president of the Japan Medical Association, Yoshitake Yokokura, said he thinks it will be difficult to hold the rescheduled Tokyo Summer Olympics even in 2021 without an effective coronavirus vaccine.

Becatoros reported from Athens, Greece and Perry from Wellington, New Zealand. Associated Press journalists around the world contributed to this report.