Pakistan jet with 98 aboard crashes in crowded neighborhood

The Pakistan International Airlines jet, an Airbus A320, plowed into an alley and destroyed at least five houses

Pakistan jet with 98 aboard crashes in crowded neighborhood

Karachi, Pakistan – A jetliner carrying 98 people crashed Friday in a crowded neighborhood near the airport in Pakistan’s port city of Karachi after an apparent engine failure during landing. Officials said there were two survivors from the plane but they also found at least 57 bodies in the wreckage.

It was unknown how many people on the ground were hurt as the Pakistan International Airlines jet, an Airbus A320, plowed into an alley and destroyed at least five houses.

The pilot was heard transmitting a mayday to the tower shortly before the crash of Flight 8303, which was flying from Lahore to Karachi and carrying many traveling for the Muslim holiday of Eid al-Fitr. 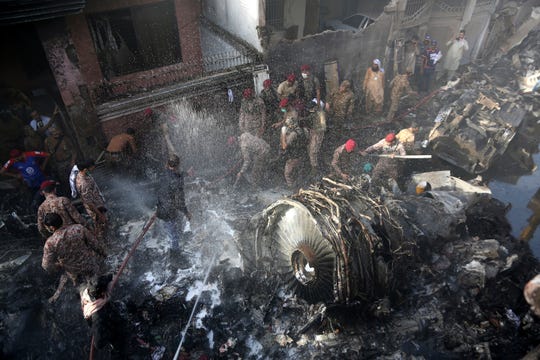 Volunteers look for survivors of a plane that crashed in residential area of Karachi, Pakistan. An aviation official says a passenger plane belonging to state-run Pakistan International Airlines carrying more than 100 passengers and crew has crashed near the southern port city of Karachi. (Photo: Fareed Khan, AP)

Video on social media appeared to show the jet flying low with flames shooting from one of its engines.

The plane went down about 2:39 p.m. northeast of Jinnah International Airport in the poor and congested residential area known as Model Colony between houses that were smashed by its wings. Police in protective masks struggled to clear away crowds amid the smoke and dust so ambulances and firetrucks could reach the crash site.

As darkness fell, crews worked under floodlights, and a portable morgue was set up. The Sindh provincial health department said it had recovered 57 bodies, while PIA chairman Arshad Malik said finding all the dead could take two to three days.

Pakistan’s civil aviation authority said the plane had 91 passengers and a crew of seven. The A320 can carry up to 180 passengers, depending on how its cabin is configured.

At least two people aboard survived, according to the health department, revising an earlier statement that three were alive.

Local TV stations showed video of a man on a stretcher they identified as Zafar Masood, the head of the Bank of Punjab. Malik later confirmed that Masood survived the crash. 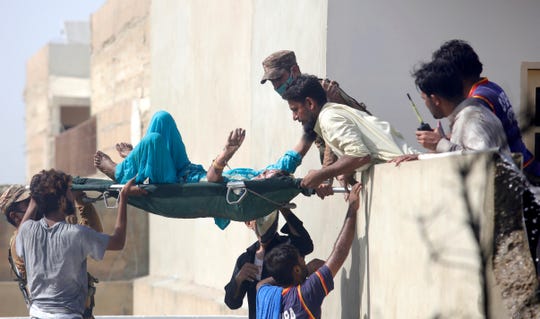 Volunteers carry an injured person at the site of a plane crash in Karachi, Pakistan, Friday. (Photo: Fareed Khan, AP)

At least three people on the ground were injured.

Malik announced an investigation into the crash, adding that the aircraft was in good working order.

Pakistan had resumed domestic flights earlier this week ahead of Eid-al Fitr, which marks the end of the holy month of Ramadan. Pakistan has been in a countrywide lockdown since mid-March because of the coronavirus, and the airline has been using social distancing guidelines on its flights by leaving every other seat vacant.

Southern Sindh province, of which Karachi is the capital, is the epicenter of the virus infections in Pakistan. The province has nearly 20,000 of the country's more than 50,000 cases. 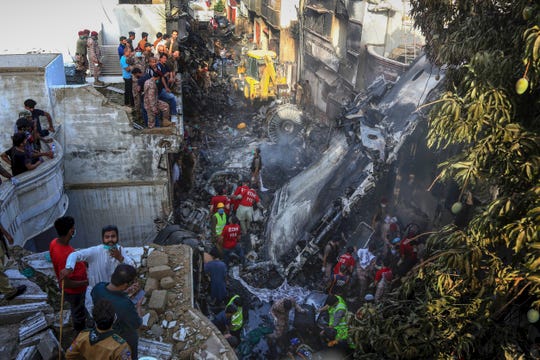 Volunteers look for survivors of a plane that crashed in a residential area of Karachi, Pakistan. (Photo: Fareed Khan, AP)

A transmission of the pilot's final exchange with air traffic control, posted on the website LiveATC.net, indicated he had failed to land and was circling to make another attempt.

“We are proceeding direct, sir — we have lost engine,” a pilot said.

“Confirm your attempt on belly,” the air traffic controller said, offering a runway.

In one of the radio communications, at least one exchange from the flight sounded like a warning alarm was sounding in the cockpit.

A resident, Abdul Rahman, said he saw the jet circle at least three times, appearing to try to land before it crashed.

Science Minister Fawad Ahmed Chaudhry said this year has been a “catastrophe — just survival is so difficult,” with the pandemic and now the tragedy of the plane crash.

Most of the passengers were heading home to celebrate Eid-al Fitr, he said.

“What is most unfortunate and sad is whole families have died, whole families who were travelling together for the Eid holiday,” he said in a telephone interview in the capital of Islamabad.

The flight from the northeastern city of Lahore typically lasts about an hour and a half.

Airworthiness documents showed the plane last received a government check on Nov. 1, 2019. PIA’s chief engineer signed a separate certificate April 28 saying all maintenance had been conducted. It said “the aircraft is fully airworthy and meets all the safety” standards. 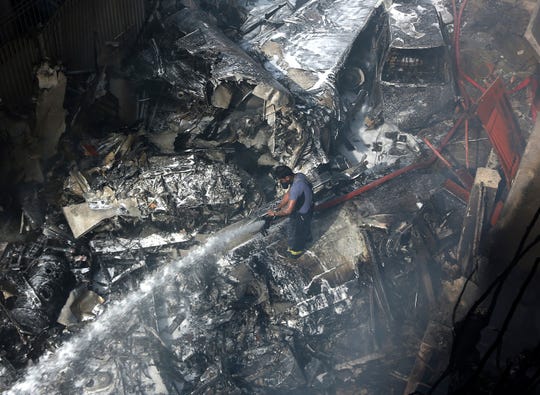 Ownership records for the Airbus A320 showed China Eastern Airlines flew the plane from 2004 until 2014. The plane then entered PIA’s fleet, leased from GE Capital Aviation Services.

Perry Bradley, a spokesman for GE, said the firm was “aware of reports of the accident and is closely monitoring the situation.”

Airbus said it would provide technical assistance to investigators in France and Pakistan, as well as the airline and engine manufacturers.

“We at Airbus are deeply saddened by the tragic news of flight #PK8303," tweeted Executive Director Guillaume Faury. "My thoughts and those of my Airbus colleagues, go to the families and loved ones affected. In aviation, we all work hard to prevent this. Airbus will provide full assistance to the investigating authorities.”