Paul Whelan, 50, denies the allegations and claims he was set up by a Federal Security Service major

Russian prosecutors asked for an 18 year sentence for Novi resident Paul Whelan, who is on trial in Moscow accused of spying, Interfax news agency reported, citing his lawyer Vladimir Zherebenkov.

Whelan, 50, denies the allegations and claims he was set up by a Federal Security Service major who owed him 100,000 rubles ($1,400). He has been detained in Russia for 17 months on spy charges, which carry a sentence of up to 20 years in prison. 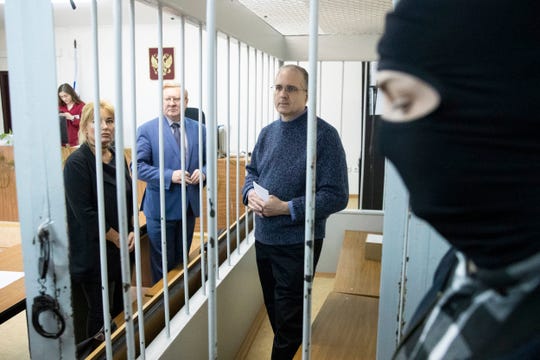 Paul Whelan, a Novi resident, center, who was arrested in Moscow in December 2018, waits for a hearing in a court in Moscow, Russia, Friday, May 24, 2019. The American was detained for alleged spying. (Photo: Pavel Golovkin, AP)

Senior Russian officials have proposed swapping Whelan for a Russian pilot, Konstantin Yaroshenko, who is serving a 20-year sentence for conspiracy to smuggle cocaine into the U.S.

Sentencing will be held on June 15, Interfax reported, citing Zherebenkov.