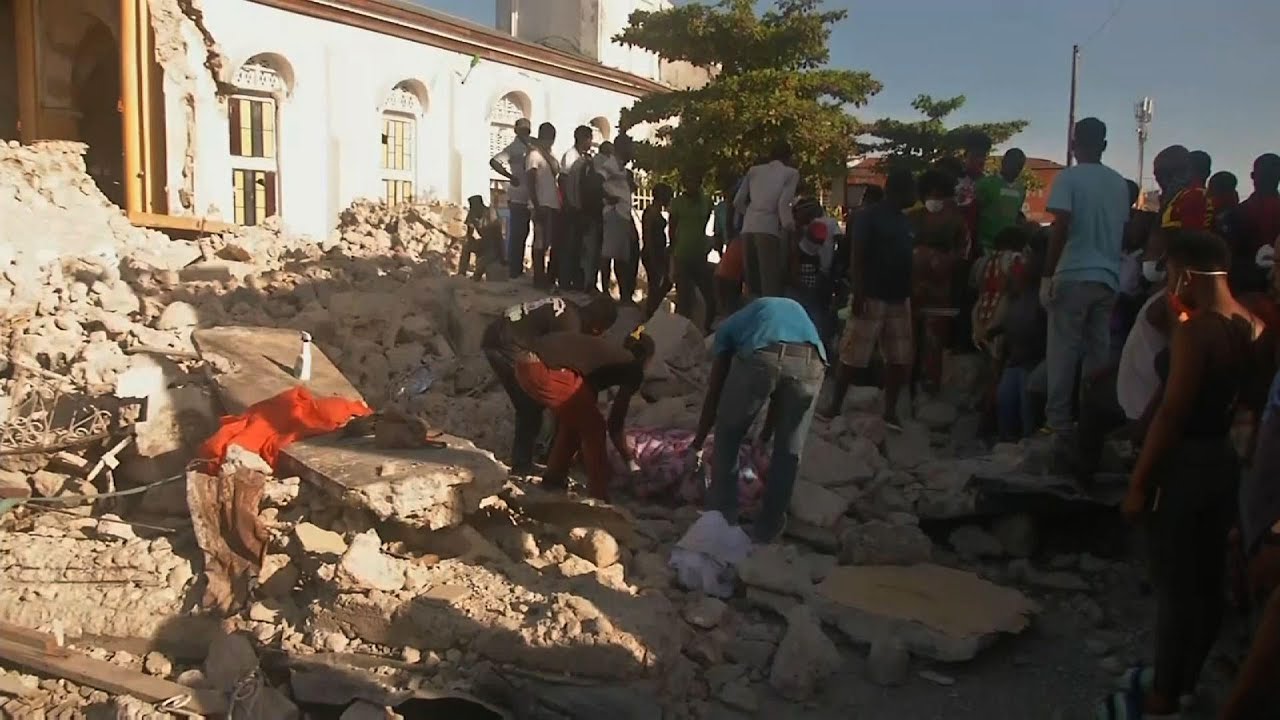 Les Cayes, Haiti — The death toll from the powerful earthquake that struck Haiti over the weekend has risen to 1,419, while the number of injured people has grown to 6,000, the Caribbean nation’s Civil Protection Agency said Monday.

The earthquake destroyed thousands of homes, offices, homes, churches and other structures. And the devastation could soon worsen with the coming of Tropical Depression Grace, predicted to reach Haiti on Monday night with strong winds, heavy rain, mudslides and flash flooding. Rainfall could reach 15 inches (38 centimeters) in some areas.

“We are working now to ensure that the resources we have now are going to get to the places that are hardest hit,” said Jerry Chandler, head of the agency, said.

He referred to the Haitian provinces of Cayes, Jeremie and Nippe, which are in the country’s southwestern portion.

Rescuers and scrap metal scavengers dug into the floors of a collapsed hotel Monday in this quake-ravaged coastal town, where 15 bodies had already been extracted. Jean Moise Fortunè, whose brother, the hotel owner, was killed in the quake, believed there were more people trapped in the rubble.

But based on the size of voids that workers cautiously peered into, perhaps a foot (0.3 meters) in depth, finding survivors appeared unlikely.

The quake, centered about 125 kilometers (80 miles) west of the capital of Port-au-Prince, killed at least 1,419 people, nearly razing some towns and triggering landslides that hampered rescue efforts in a country that is the poorest in the Western Hemisphere. Haiti already was struggling with the coronavirus pandemic, gang violence, worsening poverty and the political uncertainty following the July 7 assassination of President Jovenel Moïse when the quake struck Saturday.

And the devastation could soon worsen with the coming of Tropical Depression Grace, predicted to reach Haiti on Monday night with strong winds, heavy rain, mudslides and flash flooding. Rainfall could reach 15 inches (38 centimeters) in some areas, the country’s Civil Protection Agency said.

As work, fuel and money ran out, desperate Les Cayes residents searched collapsed houses for scrap metal to sell. Others waited for money wired from abroad, a mainstay of Haiti’s economy even before the quake.

Anthony Emile waited six hours in a line with dozens of others trying to get money his brother had wired from Chile, where he has worked since Haiti’s last quake.

“We have been waiting since morning for it, but there are too many people,” said Emile, a banana farmer who said relatives in the countryside depend on him giving them money to survive.

Injured earthquake victims continued to stream into Les Cayes’ overwhelmed general hospital, three days after the earthquake struck. Patients waited to be treated on stair steps, in corridors and the hospital’s open veranda.

“After two days, they are almost always generally infected,” said Dr. Paurus Michelete, who had treated 250 patients and was one of only three doctors on call when the quake hit.

The magnitude 7.2 earthquake left at least 5,700 people injured, with thousands more displaced from destroyed or damaged homes. Les Cayes was darkened by intermittent blackouts, and many people slept outside, clutching transistor radios tuned to news, terrified of the continuing aftershocks.

Efforts to treat the injured were difficult at the hospital, where Michelete said pain killers, analgesics and steel pins to mend fractures were running out amid the crush of patients.

“We are saturated, and people keep coming,” he said.

Josil Eliophane, 84, crouched on the steps of the hospital, clutching an X-ray showing his shattered arm bone and pleading for pain medication.

Michelete said he would give one of his few remaining shots to Eliophane, who ran out of his house as the quake hit, only to have a wall fall on him.

Nearby, on the hospital’s open-air veranda, patients were on beds and mattresses, hooked up to IV bags of saline fluid. Others lay in the garden under bed sheets erected to shield them from the brutal sun. None of the patients or relatives caring for them wore face masks amid a coronavirus surge.

Officials said more than 7,000 homes were destroyed and nearly 5,000 damaged from the quake, leaving some 30,000 families homeless. Hospitals, schools, offices and churches also were destroyed or badly damaged.

Underlining the dire conditions, local officials had to negotiate with gangs in the seaside district of Martissant to allow two humanitarian convoys a day to pass through the area, the U.N. Office for the Coordination of Humanitarian Affairs reported. The agency called Haiti’s southern peninsula a “hot spot for gang-related violence,” where humanitarian workers have been repeatedly attacked.

The agency said the area has been “virtually unreachable” over the past two months because of road blocks and security concerns. Agency spokeswoman Anna Jefferys said the first convoy passed through Sunday with government and U.N. personnel. and the U.N. World Food Program plans to send in food supplies via trucks Tuesday.

Prime Minister Ariel Henry declared a one-month state of emergency for the whole country and said the first government aid convoys had started moving help to areas where towns were destroyed and hospitals were overwhelmed.

“Little more than a decade on, Haiti is reeling once again,” Fore said, referring to the 2010 earthquake that ravaged Haiti’s capital, killing tens of thousands. “And this disaster coincides with political instability, rising gang violence, alarmingly high rates of malnutrition among children, and the COVID-19 pandemic – for which Haiti has received just 500,000 vaccine doses, despite requiring far more.”

The country of 11 million people received its first batch of U.S.-donated coronavirus vaccines only last month via a United Nations program for low-income countries.

Medical workers from across the region were scrambling to help as hospitals in Les Cayes started running out of space to perform surgeries.

Pierre’s medical team was taking some patients to St. Boniface to undergo surgery, but with just two ambulances, they could transport only four at a time.

Working with USAID, the U.S. Coast Guard said a helicopter was transporting medical personnel from the Haitian capital to the quake zone and evacuating injured back to Port-au-Prince. Lt. Commander Jason Nieman, a spokesman, said other aircraft and ships were being sent.

At the Les Cayes hospital, Emma Cadet, 41, a carpenter’s wife, hovered over her 18-year-old son, Charles Owen, as he awaited an operation on his broken arm. He was among the lucky patients to have received pain medication.

Worse off was Nerison Vendredi, 19, lying quiet but alert. No casts or splint would help her because she apparently had suffered internal injuries and could not move.

There were some stories of miracle survivals, but they were becoming fewer as the days passed.

Jacquelion Luxama was leading his goats to a watering hole Saturday when a hillside collapsed on him, trapping him amid boulders and a rockslide that stripped skin from his hip.

“I started yelling, and luckily some other famers heard me, and they came and pulled me out, ” said Luxama, lying on a mattress at the Les Cayes hospital.