Monsignor 'cared for everybody'

Monsignor 'cared for everybody'

From the numerous community groups he worked with to heading Detroit's Cathedral of the Most Blessed Sacrament, Monsignor James Robinson demonstrated a loving kindness that awed others.

"He was a man who cared for everybody," said Beverly LeMons, a longtime church member. "People gravitated towards him."

Born May 17, 1931, he grew up in Selma, Alabama, where the Society of St. Edmund established a mission. Inspired by the religious order's charitable work and compassion, he became involved and was ordained a priest in 1957.

He later worked as a pastor and mission apostolate in North Carolina; a teacher in New York; a seminary superior in Vermont; and the assistant director of his hometown mission before joining the Archdiocese of Detroit in 1976.

In 1983, Monsignor Robinson was named rector at the Cathedral of the Most Blessed Sacrament — the first African-American to hold that position, church officials said.

There, he oversaw the property's expansion, upgrading and renovation, said Monsignor Michael LeFevre, the current rector. "Jim wanted this to be a jewel," he said.

In this copy image of the Rev. Monsignor. James Patrick Robinson, third from the U.S. flag, walking with Coretta Scott King, wife of slain civil-rights leader the Rev.Martin Luther King, during a peace march in Alabama called, "The Struggle Goes On 1975" by William Anderson. His funeral mass was held at Cathedral of The Most Blessed Sacrament in Detroit, Saturday, January 17, 2015. Todd McInturf, The Detroit News
Fullscreen 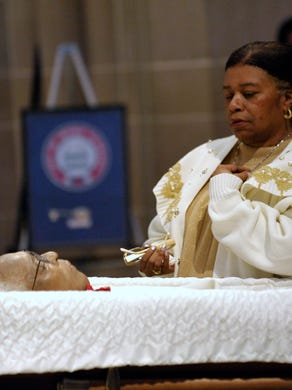 Monsignor James Robinson's sister, Bennie Ragland, third from right, of Detroit, is comforted by his niece, Rosalynne Atterbeary, second from left, and her husband, Knowlton Atterbeary, left, both of Maryland. Todd McInturf, The Detroit News
Fullscreen

Attendants attach the casket top as they close it at the beginning of the mass. Todd McInturf, The Detroit News
Fullscreen

The faithful listen to the funeral mass. Todd McInturf, The Detroit News
Fullscreen

Robinson's youngest sister, Gloria Middleton, left, and her daughter, Delores Douglas, his niece, both of Detroit, listen to the service. Todd McInturf, The Detroit News
Fullscreen

Most Reverend Allen H. Vigneron - Archbishop of Detroit, incenses the casket at the end of the funeral mass. Todd McInturf, The Detroit News
Fullscreen

Pallbearers carry the casket to the hearse. Todd McInturf, The Detroit News
Fullscreen

Monsignor Robinson readied the church in time for a visit from Pope John Paul II in 1987. "It was fantastic," said his niece, Rosalynne Atterbeary, whose children also attended.

He also was committed to many causes, including improving race relations in his hometown and elsewhere, said his sister, Bennie Ragland.

In the 1960s, he worked to desegregate some North Carolina public schools, according to the Society of St. Edmund. The next decade, while serving in Selma, he helped organized a procession commemorating the 1965 voting rights march from Selma to Montgomery, Alabama; and persuaded white councilmen to elect members by district, which led to five blacks being elected, relatives and associates said. The monsignor also helped sparring groups resolve their differences, thus releasing funds for new buildings, and worked with the then-mayor to push for urban renewal, his sister said.

"He's a peacemaker," Ragland said, adding honors included Selma leaders hanging his picture in a city center. "He knew how to work with all people."

A founding member of the National Black Catholic Clergy Caucus, Monsignor Robinson also was elected to fill a vacancy in the Pontifical North American College in Rome and served on the board of trustees at Madonna University, associates said.

Monsignor Robinson retired from his church in 2003 and was named rector emeritus.

When not serving, he loved celebrating holidays with his relatives and watching sports. "He lived and died for Notre Dame," LeFevre said.

Even in his last days, he remained dedicated to serving others. "He was a powerful priest and mentor and presence in this city that's going to be sorely missed," said Donna Tschirhart, a pastoral associate.

Other survivors include another sister, Gloria Middleton, and many nieces and nephews.

A funeral Mass is 11 a.m. Saturday, at Cathedral of the Most Blessed Sacrament, 9844 Woodward, Detroit. He lies in repose at 10 a.m.

Interment is set for a later date in Selma, Alabama.