Detroit firefighters remember fireman who lived life 'with no fear'

Detroit firefighters remember fireman who lived life 'with no fear' 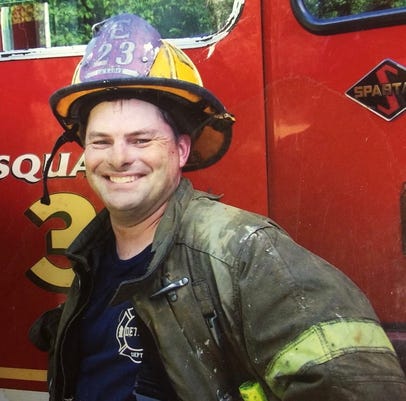 Detroit — Firefighter Michael Lubig was a man whose colleagues say lived his life with no fear.

The 46-year-old, second-generation fireman died late Monday, days after suffering a medical emergency at a west side firehouse and being rushed to Henry Ford Hospital.

Detroit Fire Commissioner Eric Jones said the cause of death is under investigation, and the incident unfolded during a 24-hour shift Thursday while Lubig was working a detail as an acting sergeant at Squad 4 on the city's west side.

That day, Lubig and his crew had battled three fires and gone out on a medical run.

Jones said Lubig's fellow firefighters worked on him before EMS transported him to the hospital.

The married father of four joined the department in 1999 and was seemingly the picture of health. He was involved in martial arts and an avid runner who just last month had participated in a half-marathon during the Detroit Free Press/Chemical Bank Marathon.

The firefighter, who was assigned to Engine 58 on the east side, enjoyed hunting and fishing and was always in good spirits, Detroit Fire Fighter Association President Mike Nevin said of Lubig, who was affectionately referred to by his friends as "little buddy."

"He was a small guy in stature, but his heart was as big as anyone's. He was always smiling," Nevin said. "He was a lover of life, more than anything."

Nevin said Lubig also worked a side job installing carpeting and often would do jobs for his fellow firefighters, only seeking "beer and a couple laughs" in return, Nevin said.

"He was a wonderful man. He's got a wonderful family," he said. "This is just a real tragedy."

Firefighter David Massenberg was honored in 2014 for rescuing a mother and her teenage son from a blaze at an apartment building on Denver Street and said it was Lubig who was there along with him, working to extinguish the fire.

"He put the fire out, and I got the kid and the mom," said Massenberg, who described Lubig as a "fun-loving" jokester and "a good guy."

"He was a great guy, and he's going to be sorely missed," he said.

Jones, who was among those gathered at the hospital with Lubig's family, said Lubig was coming up on his 20-year anniversary with the department and had been "in the prime of his life."

"It was an overwhelming outpouring of support for a man who lived his life with no fear," Jones said. "I can't understand how this very active man is no longer with us, but I know one thing, he was a good man and extremely loved."

On Facebook, Lubig's wife, Lisa, posted in tribute to her husband and the support for the family.

"Rest in peace my love. You were my life, my love, my hero. I don't know how to live life without you," she wrote. "Our DFD family is here for us, as well as all of our family from far and wide ... Nothing can compare to the love, comfort and support they have given and I know will continue to give. I hope you can rest easier knowing they are taking care of us."

Lubig's death is among many endured by the department in recent years.

"All I can say is the losses are devastating," Jones said.  "It's a tragedy that has brought us closer. It's strengthened the department. We have no choice but to get stronger."