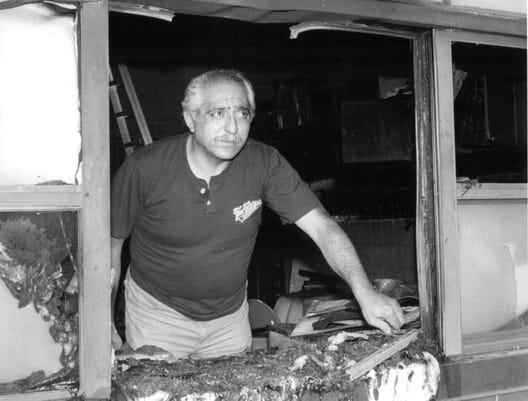 Donald Unis, a longtime civil rights activist and retired Dearborn Fire Department captain who represented the Arab-American community in Dearborn and beyond, died Saturday, Nov. 24, 2018, of heart problems. He was 79.

Mr. Unis had been receiving treatment in Dearborn when he died, his nephew Ron Amen said.

"He was an outspoken defender of the Arab-American community at large," Amen said. "He lived his entire life in Dearborn. He was very outspoken. There was no question as to where his loyalties are."

Mr. Unis, a Lebanese-American, was one of the founders of the Arab American Political Action Committee and ACCESS, formerly the Arab Community Center for Economic and Social Services, a leading community nonprofit created in 1971 to serve Arab immigrants.

Amen said his uncle was constantly urged to run for political office but he "never wanted to seek the limelight."

"Political debate was his forte," he said.

Amen said Mr. Unis was a "tough guy to argue with because he was literally an encyclopedia" of important information.

He retired as a captain nearly 20 years ago from the Dearborn Fire Department, the second Arab-American hired in the department. He also served in the U.S. Army in 1957 and was stationed in Germany for 18 months, Amen said.

According to an obituary posted on santeiufuneralhome.com, survivors include his wife, Nancy; children Lisa Voss, Tamara Mitchell, Juli Szalkowsi and Derek; and siblings Wanda, Ronald, Chuck and Tom.

Services for Mr. Unis will be held 2-8 p.m. Monday at John N. Santeiu and Son Inc. funeral home at 1139 N. Inkster Road in Garden City. A funeral service will be held at 11 a.m. Tuesday at  the funeral home. Burial is at St. Hedwig Cemetery.

The family suggests memorials to the Dearborn Firefighters Burn Drive.