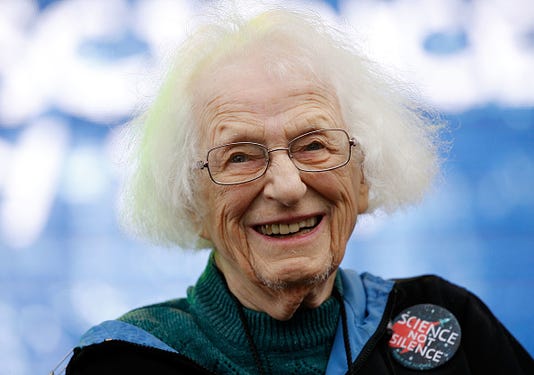 American astronomer Dr. Nancy Grace Roman, who was one of the first female executives at NASA, attends the Earth Day March for Science Rally on the National Mall on April 22, 2017 in Washington, DC.(Photo: Paul Morigi, Getty Images)

Germantown, Md. – Nancy Grace Roman, the first woman to hold an executive position at NASA and who helped with development of the Hubble Space Telescope, has died.

Laura Verreau, a cousin, confirmed Thursday that Roman died on Christmas Day after a prolonged illness. She was 93.

The NASA webpage said Roman was the first chief of astronomy in the office of space science at NASA headquarters and was the first woman to hold an executive position at the agency. She had direct oversight for the planning and development of astronomy-based programs including the Cosmic Background Explorer and the Hubble Space Telescope.

Roman retired from NASA in 1979. Throughout her career, she advocated for women and young people to become involved in science.

A memorial service is being planned.