Horowitz, whose “Fight Back!” syndicated program made him perhaps the best-known consumer reporter in the U.S., has died 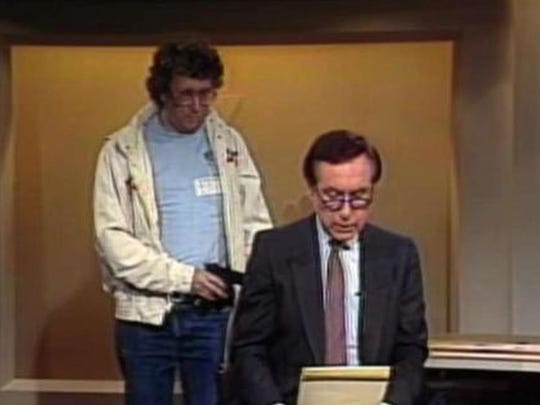 This Aug. 20, 1987, image made from video shows an intruder with a gun, as journalist David Horowitz is taken hostage during a live broadcast of Channel 4 Los Angeles. Horowitz remained calm and read the gunman's statements on camera, but the station had cut the broadcast without the gunman becoming aware of that fact. The longtime consumer journalist has died at age 81, his wife told NBC4. (Photo: AP)

Los Angeles – David Horowitz, whose “Fight Back!” syndicated program made him perhaps the best-known consumer reporter in the U.S., has died. He was 81.

Horowitz had dementia and died on Thursday in Los Angeles, a family spokesman said.

A popular feature on “Fight Back!” were commercial challenges, which included “products being dropped from a helicopter or being smashed with wrecking balls to test claims of strength” and even durability tests featuring an elephant, according to a family biography.

“Fight Back!” aired on KNBC-TV, where Horowitz was a consumer reporter for more than 15 years.

At its peak, the program was syndicated on dozens of TV stations across the country. Horowitz also made regular appearances on KNBC newscasts and on NBC’s “Today” show. He also had a popular radio program and a newspaper column and authored several best-selling books.

In 1993, Horowitz moved to KCBS-TV where he delivered “Fight Back!” segments during news broadcasts, according to the family biography.

“I don’t consider myself a consumer advocate,” Horowitz told the Los Angeles Times in 1988. “If you’re on television you have to really be broadcasting in the public interest … but you also have to be objective … I do a lot of stories where the consumer’s wrong – where they’re trying to rip off companies, too.”

In 1987, Horowitz was taken hostage during a KNBC-TV broadcast by a gunman with mental problems. The journalist read the man’s statements on camera although the hostage-taker didn’t realize the broadcast had been cut. The weapon turned out to be an empty BB gun.

The experience led Horowitz to join a successful campaign to outlaw realistic-looking toy guns in California and other states.

His reporting was criticized by some consumer advocates and reporters as being too concerned with showmanship and less-serious consumer concerns, such as whether a particular popcorn brand lived up to its advertising.

But the Chicago Tribune noted in 1987 that Horowitz waged successful campaigns to remove life-threatening sulfites from salad bars and to require automakers to install rear window collision-avoidance lights. He was honored by consumer groups and in 1981 became the first newsman to receive the Chief U.S. Postal Inspector’s Award for uncovering mail fraud, the Tribune reported.

Horowitz also took heat for his paid work for Better Books, which offered directories with ads, consumer tips and lists of Better Business Bureau members but collapsed into bankruptcy.

Horowitz was born on June 30, 1937, in the Bronx and held a master’s degree in journalism from Northwestern University. Before joining KNBC-TV in the 1970s, he worked for various newspapers and TV stations.

Horowitz also appeared as himself on episodes of “Silver Spoons,” “ALF,” “The Golden Girls” and “Saved by the Bell.”

Horowitz worked “to make the world a better and more honest place,” his family said in a statement.

He is survived by his wife, Suzanne, two daughters and two grandchildren.