Over a career that spanned more than three decades, Bullard was a "tireless" journalist who "loved to upset the status quo," colleagues say.

Throughout his tenure at The Detroit News, George Bullard was the epitome of a dedicated journalist.

“He just loved this business,” said Editorial Page Editor Nolan Finley, a longtime colleague. “He loved to break news. He loved to get a story no one else had. He loved to upset the status quo. He was the very definition of a reporter who afflicted the comfortable.” 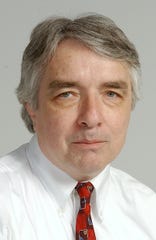 Mr. Bullard, who held numerous roles at The News over a career that spanned more than three decades, died Friday, Aug. 9, 2019, after battling health issues including cancer. He was 74.

He joined The News in 1971 and spent his early years covering the Downriver area as a government reporter.

During that time, Mr. Bullard was sent to Rome to cover the death of Pope John Paul I in 1978, said Gary Schuster, a former news editor for the paper.

“He was tireless, he was thorough and a good writer. He was economic with the language,” Schuster recalled. “He had a biting sense of humor and was just a good, solid reporter. You could send him out on any story and you knew he would do a good job, whatever it was.”

Mr. Bullard once found himself linked to another major story.

In November 1978, he was sent to a Wyandotte bar where an armed man holding hostages had asked to speak with a reporter. The man, who said he hadn't received adequate psychiatric care, was taken into custody after sharing his story with Mr. Bullard and ordering drinks for the hostages, The News reported.

"Things happened to George that wouldn’t happen to anybody else," Finley said.

He eventually became an executive city editor and was promoted to assistant managing editor for metro news in 1994, according to News archives.

In his leadership roles, Mr. Bullard was dogged about the publication's role in informing readers, said Jim Stewart, the News' attorney.

"in my role as the lawyer for the News, George and I fought many battles together defending the public's right to know. It was serious business but we managed to share some laughs along the way," he said. "George was a true old-time newspaper man in the best sense of the word. He had a passion for getting the fair and unvarnished truth to the Detroit News readers and if you were in the way of that, you'd better get out of George's path to the truth. I will never forget George, his passion for the truth or the battles we fought together."

Mr. Bullard later became an editorial writer, a role for which he earned accolades.

The Detroit chapter of the Society of Professional Journalists in 2004 named him Journalist of the Year. The honor commended his work spearheading a seven-month editorial series, "Losing Liberty," which looked at how the war on terrorism put Americans' civil liberties at risk.

The series also earned him a first-place award in editorial writing from the Gannett Co. Inc., which formerly owned The News.

After leaving The News, Mr. Bullard continued blogging for the newspaper.

Even in that format, "he brought the same passion," Finley said.

In recent years, he relocated to Nebraska, where his wife, Sue Burzynski Bullard, The News’ former managing editor, taught at the University of Nebraska-Lincoln.

In 2018, he moved to Kingwood, Texas, to be closer to his grandchildren and to be treated at the M.D. Anderson Cancer Center in Houston.

Mr. Bullard was diagnosed with cancer in 2013 and Richter's Transformation, a rare complication of chronic lymphocytic leukemia, last year, his wife said in a blog post.

“Most people only live four to five months after that diagnosis, but George exceeded all expectations,” she wrote. “He had a way of doing that not just with cancer, but his entire life.”

In his spare time, Mr. Bullard had a wide range of pursuits — from short-wave radios to computer sets, Finley said. “When computers came on the scene, he was in his glory because it provided him the opportunity for endless tinkering.”

In addition to his wife, Mr. Bullard is survived by his daughter, Lisa Aguilar; his son, Kevin Bush; his grandchildren, Emilio, Alina, Lucía and James Kibert (Kai); his brother, Bernie; and his cousins, Mary Trudeau and Laura Sanborn, whom he considered sisters; his mother-in-law, Claudia Burzynski; and numerous nieces and nephews.

Mr. Bullard asked that contributions in his name be made to fund teacher projects at Humble Elementary School in Humble, Texas, where two of his grandchildren attend school and his daughter, Lisa, is a teacher. Tax-deductible donations can be made at https://www.donorschoose.org/donors/search.html?includeNearbyLocations=true&school=15035

A memorial is planned in Texas at a later date.