The 10-time Japanese national champion trained with major stars in Canton, Michigan, where he still worked at a coach, before collapsing Friday

Chris Reed, a three-time Olympian and 10-time ice dancing champion of Japan who trained for years in Canton, died Saturday after a heart attack, the Japanese Skating Federation announced Tuesday. He was 30.

“He’s been here for years,” said Craig O’Neill, the general manager of the Arctic Edge Ice Arena in Canton. “First, he was a skater and then, more recently, he coached.

“Last Thursday, he said good-bye and I watched him leave. And on Friday, I heard from his mother, who said he collapsed at home and he was in the hospital,” O’Neill said. 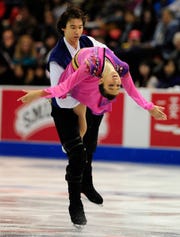 “Next thing I know, I got an email saying he passed away.”

Born in Kalamazoo to a Japanese mother and American father, Reed and his sister Cathy represented Japan in the 2010 and 2014 Winter Olympics and in eight World Championships.

The Reeds began skating when Chris was 7 and Cathy was 5 and picked up their love of skating from their mother.

“My mom always watched it,” he told The Detroit News in 2010, before traveling to the Vancouver games. “Cathy and I were there with her, watching, and we just kind of picked it up.

“Once we got to the rink and got going, it was something we really enjoyed.”

"I am absolutely stunned by the sad news,” Nagashima Akihisa, president of the Japanese Skating Federation, said in a statement. “I would like to offer my deepest appreciation to Chris Reed for his contribution to Japanese ice dancing over the years and extend condolences to his family. May Mr. Reed rest in peace."

The Reeds trained mostly under Marina Zoueva at the Arctic Edge, in a stable of international ice dancers that included the Olympic champions Meryl Davis and Charlie White for the United States and Tessa Virtue and Scott Moir for Canada.

The Reeds' highest finish in eight world championship appearances was 13th. The pair recorded their best Olympic result of 17th at the 2010 Vancouver games, and finished 21st in the 2014 games in Sochi, Russia.

Reed and Muramoto finished 15th at the 2018 Pyeongchang Games.

In a media release, the International Skating Union, the international governing body of figure and speed skating, said Reed was preparing to extend his career by coaching.

“He always wanted to stay involved in the sport and to help to develop ice dance in Japan,” the skating union said. “He was busily preparing for his second career as a choreographer and ice dance coach with his sister Cathy in Japan.”

“It deeply saddens me to tell you all my brother, my sweet, kind charismatic and loving big brother Chris has passed away suddenly over the weekend.

“Words just cannot describe home much this pains me. Chris was such a pure spirit. He filled any room he walked into with so much joy and laughter. He always knew how to make me smile.