The hand of regulation is heavy on American business 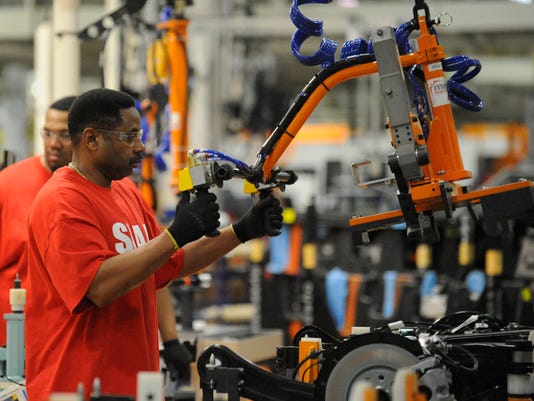 Some industries, such as manufacturing, are extremely heavily-taxed.(Photo: David Coates / The Detroit News)Buy Photo

In recent years America has not made it easy for businesses and corporations to compete effectively on the world stage. Now, the midterm election may have opened the door for some positive changes.

The hand of regulation is heavy on American business. Thousands of new regulations fill the pipeline, and small businesses in particular struggle to keep up with the burden. According to a recent study by the National Association of Manufacturers, the cost of the federal regulatory burden was a staggering $2.028 trillion in 2012.

Businesses in the United States also operate under one of the highest corporate tax rates in the world. Further, there is a high disparity of tax rates between industries in this country. Pass a tax break here, target an industry for higher taxes there, and you have a broad range of inequity. According to calculations by The New York Times, the average tax rate for the energy industry is 37 percent. It is 24 percent for industrials (think manufacturers). Financial companies pay at an average rate of 33 percent. Apple’s rate is just 14 percent.

The result is that now we are seeing a wave of inversions –CEOs feel compelled to merge with foreign companies to move their headquarters offshore and escape our nation’s extremely high corporate tax rate. Probably none of these corporate leaders want the move, but: every inversion is done in accordance with US tax law; shareholder activists urge them as the way to meet fiduciary responsibility; and the companies are convinced that they cannot compete effectively under these U.S. tax rules.

Comprehensive corporate tax reform would go a long way toward helping American businesses invest, create new jobs and compete worldwide. Inversions would become a thing of the past.

With the election now behind us, it’s clear that Senator Mitch McConnell, the next Senate Majority Leader, and Speaker of the House John Boehner understand the need to tackle this tough task. In a joint Wall Street Journal op-ed, they wrote that one of their top priorities will be to address the “insanely complex tax code that is driving American jobs overseas.” McConnell even opined that tax reform is one issue where Republicans may be able to work with the Obama administration.

Senator Orrin Hatch (R-UT), the incoming chairman of the Senate Finance Committee, has echoed McConnell’s comments about possible bipartisanship on this issue. And in his post-election comments, President Obama signaled that tax reform could be an issue that both parties can come together on to fix. Let’s hope all three are correct in their predictions.

With a new Congress coming to Washington, next January is the time for both parties and the administration to sit down and start work on comprehensive corporate tax reform. Of course, like any challenge, the devil will be in the details. It is critical that the end product be uniform and not discriminate against any one sector of our economy.

Congress can prove that it wants to break out of gridlock and work together to tackle tough problems by making corporate tax reform a top priority. Done right, it will lead to waves of new investment and the creation of many new American jobs – that’s enough for the next Congress to move forward immediately.

Jack Rafuse was a White House energy adviser during the Nixon administration and is principal of the Rafuse Organization.