Hamilton: With the budget, the president calls the shots

Hamilton: With the budget, the president calls the shots 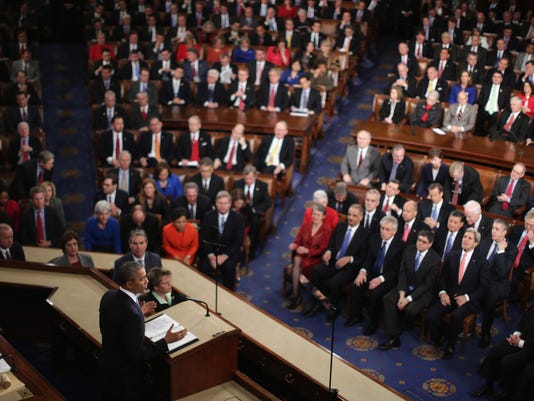 Hamilton: For better or worse, the budget is an executive matter.(Photo: Chip Somodevilla / Getty Images)

It may not be obvious from the news coverage, but a good bit of Congress’s 2015 agenda just landed on Capitol Hill with a thud. I mean this literally. The federal budget that President Barack Obama recently submitted runs to 2,000 pages.

This is the most important government document produced each year, so its heft is more than physical. The budget is how we decide what share of this country’s economic resources we should devote to government — and how we should spend them. It’s where we set out our national priorities, sorting out how to allocate money among defense, the environment, education, medical research, food safety, public works. ... You get the idea.

Which is why you saw the political maneuvering begin the moment it arrived. In a press conference after Obama submitted his budget, House Speaker John Boehner dismissed it out of hand. “The president gave the American people a good laugh yesterday,” he said. Every year, politicians play some variation on this theme. I’ve lost count of the times I’ve heard a budget declared “dead on arrival.”

Yet here’s what you need to remember: Congress changes only a small portion of the budget. Well over half is mandated spending — interest on the debt, entitlements, contractual obligations of the government. And even when it comes to the roughly 40 percent of the budget that is discretionary spending, Congress never rewrites it wholesale; in general, all but 5 or 10 percent of the White House’s spending blueprint will make it through intact. The president’s budget, in other words, is never “dead on arrival.”

This is not to say that what Congress does will be unimportant. The debate from here on out will be specifically about taxing and spending priorities — about how much money should go to defense, or homeland security, or social welfare — and more generally about who has the best ideas for addressing the country’s needs.

There will be times in upcoming months when it sounds as though our economy’s health depends on what our lawmakers do. The budget, after all, is where the president and Congress can have an impact on the economy. I’m not persuaded, however, that it’s as large as they’d have us believe. The Federal Reserve, through its control over the money supply, has its hands on an immensely important economic lever. So do the big banks, major corporations and millions of consumers.

Still, Congress faces important questions. The deficit, which in past years was the focus of furious debate, holds less attention this year because we’ve made so much progress in reducing it. A few years ago, it amounted to almost 10 percent of GDP; in 2014, it was 2.7 percent. On the other hand, the federal debt — what we owe to creditors who financed our accumulated annual deficits — is higher than it’s been for generations, and we’re not dealing with the hard choices necessary to get it under control. In particular, this means finding ways to control entitlement spending in an aging society. We do not need to panic about our finances, but we can’t afford to be complacent either.

There will be voices in Congress over the next few months urging that we curb spending sharply. In a recovering economy that is still beset with income stagnation, I’d argue that slamming hard on the brakes would be a mistake. Instead, we need to shift our spending toward investment, focusing on areas that generate or underpin economic growth: infrastructure, research and development, education.

Congress used to reign supreme in budget-making. George Washington didn’t even think it was his job to send a budget to Congress, and the president wasn’t legally required to submit one until the budget act of 1921 codified the practice. Now, of course, the president has become the chief budget-maker, and the Congress reacts to, and largely accepts, his proposals. The maneuvering on Capitol Hill over the next few months will, indeed, nudge the country in one direction or another. But our basic course was already set by the time those 2,000 pages hit lawmakers’ desks.

Lee Hamilton is director of the Center on Congress at Indiana University. He was a member of the U.S. House of Representatives for 34 years.