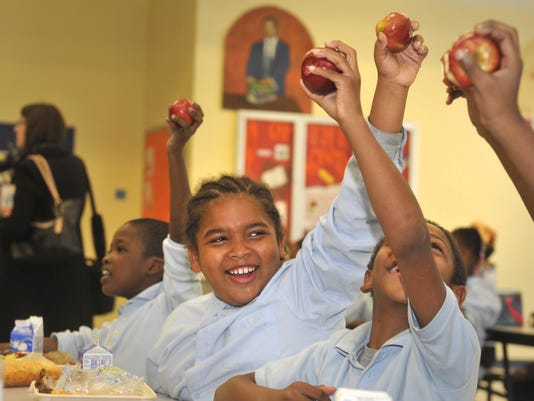 Common enrollment has worked elsewhere, and some are considering it for Detroit.(Photo: Max Ortiz / The Detroit News)Buy Photo

Two competing plans to fix Detroit's troubled public schools—one from the Coalition for the Future of Detroit Schoolchildren, the other from Gov. Rick Snyder—have plenty of differences. But they agree on at least one thing: the need for a common enrollment system.

Unlike the picture in Detroit today—where charter school authorizers and school districts have their own rules, admissions requirements and deadlines—common enrollment centralizes the application and student assignment process for all district and charter schools. Parents submit a single application with a single deadline, ranking all public schools they want their children to attend. The process of matching students to schools is designed so that families can safely list their true preferences (instead of trying to outwit or second-guess the system).

My colleagues and I recently analyzed these systems in Denver and New Orleans, the first cities in the country to adopt common enrollment. Early evidence suggests it is a valuable tool to make school choice work for families, resulting in more fair play, transparency and consistency in enrollment.

Clearly, this is one small piece of a much larger vision needed for Detroit. Common enrollment won't cure all that ails the city's schools (starting with a vacuum of clear leadership and accountability). It won't transform bad schools into good schools. But it will help Detroit families make sense of a highly fragmented school landscape. Detroit's roughly 90,000 students attend schools overseen by a dozen different entities (including charter school authorizers and school districts) and some families use a state provision that allows them to send their children to nearby suburban schools.

In our 2014 study on how parents experience choosing schools, 35 percent of Detroit parents reported difficulty understanding which schools their child was eligible to attend, while 25 percent said they couldn't get the information needed to make an informed choice. Detroit schools lack a uniform way to communicate school-by-school information on student performance, suspensions and expulsions, and programs or interventions (from early childhood to special education or bilingual education.) With Detroit schools battling for a declining number of students, families are flooded with glossy marketing materials that often leave them no better informed on what really matters to them for their child's education.

It doesn't have to be this way. To complement their common enrollment systems, Denver and New Orleans created new parent information policies, including parent guides with common metrics to assess performance school by school. The guides spell out school demographics, details on schedules and class sizes. Parents in both cities reported using these guides in their school-selection process. Thanks to common enrollment, leaders in both cities have data on parent preferences and student enrollment in a consolidated information system. They're using this data to identify high-demand, high-quality schools for possible expansion. And they're using the information as a launching point to better engage families who traditionally have been underserved in the school-choice process. Denver, for example, formed a team of parent choice liaisons in the 2014-15 school year to engage and counsel parents through the choice process in the city's Southwest region after noting that these families were least likely to participate. This year, Southwest Denver parents participated in choice at rates comparable to the rest of the city.

We're not suggesting all is rosy in Denver and New Orleans. City leaders acknowledge they need to do more to help parents navigate choices.

Simply adopting common enrollment in Detroit is not enough. But it can be an important part of bringing rationality and accountability to a wildly complicated school landscape. Common enrollment leaves city leaders nowhere to hide, laying bare the distribution of high- and low-performing schools. Critically, Detroit's leaders must address the lack of high-quality, effective public schools. Otherwise, they're leaving Detroit families to choose among equally poor options. And that's not much of a choice at all.

Betheny Gross is research director at the Center on Reinventing Public Education (CRPE) at the University of Washington Bothell, where she has been leading studies on common enrollment systems and parents' experiences choosing schools.