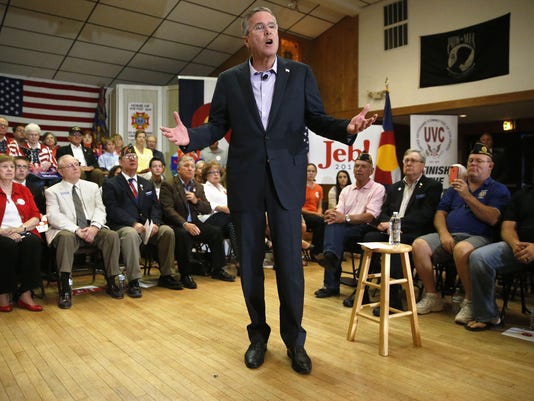 Jeb Bush has amassed a sizable war chest and positioned himself to be the safe establishment pick after Donald Trump’s expected implosion. Alas, on foreign policy Bush has turned hard right.

“Our security,” he recently claimed, is “in the balance.” Yet the U.S. continues to dominate the globe as no other nation before it.

Moreover, Bush contended, “if we withdraw from the defense of liberty elsewhere, the battle eventually comes to us anyway.” Actually, the world long has been filled with horror which Washington chose not to make its own — and it did not become America’s own.

Bush followed the Republican stereotype in demanding more military spending. He warned of moving “straight in the direction of the greatest risk of all — military inferiority.” To whom?

“We are in the seventh year of a significant dismantling of our own military,” he falsely claimed. Real spending continued to increase until 2012. America’s “military power must be rebuilt.”

In Bush’s view 2.5 percent of GDP for the Pentagon is too low. But as Ronald Reagan observed, military spending should reflect the threat environment, which is vastly improved from Reagan’s time. Bush seemed to recognize this reality when he suggested a strategic review since “the world’s changed. I mean, we’re, the Soviets aren’t going to launch a tank attack across Eastern Germany into Germany.”

Very true, which makes you wonder how he could speak of “multiplying” threats when the biggest ones have disappeared. He should launch a strategic review first, which would suggest fewer defense responsibilities and thus lower military outlays.

Bush first called his brother’s policy in Iraq “a mistake.” More recently, however, he declared that ousting Saddam Hussein was a “pretty good deal.”

Bush misleadingly argued that ISIS “didn’t exist when my brother was president” and that a continued U.S. military presence “would not have allowed” the group to flourish. This is false in almost every detail.

ISIS is an outgrowth of al-Qaeda in Iraq, which developed in response to George W.’s invasion. The group grew in opposition to the U.S. occupation and Shia-majority regime installed by Washington. Although badly battered, the ISIS-precursor survived the famed “surge” and more important “Sunni Awakening.”

Alas, the surge did not foster sectarian reconciliation, as intended. ISIS exploded when the Sunni Awakening went into reverse in response to oppressive sectarian policies begun by the Iraqi government under George W., who also failed to win approval of a status of forces agreement and continued U.S. military presence.

Obama only followed the Bush timetable. Explained U.S. Army Chief of Staff Gen. Raymond Odierno: “Us leaving at the end of 2011 was negotiated in 2008 by the Bush administration. And that was always the plan.”

Nor would a continuing presence of U.S. troops have achieved much, unless augmented and used in continuing anti-insurgency operations — contrary to the fervent desire of most Americans. And maintaining the military occupation would have provided a target for radicals of every sectarian viewpoint.

Nevertheless, Jeb urged a new war dedicated to “throwing back the barbarians of ISIS, and helping the millions in the region who want to live in peace.” Actually, those millions, rather than Americans, should fight ISIS.

Bush advocated additional sanctions, which would not have been matched by other nations. He also recommended that Washington support the Iranian opposition. Does he believe the Islamist regime would allow increased international interference promoting its ouster?

Jeb Bush also contended that America’s “alliances need rebuilding.” Which means increasing subsidies for rich industrialized states, which are capable of defending themselves. Bush’s alliance policy also means placating authoritarian governments — Egypt, Saudi Arabia, and others. So much for democracy and liberty.

Jeb Bush is wrong for the U.S. Americans can’t afford a rerun of Dubya’s disastrous presidency.

Doug Bandow is a senior fellow at the Cato Institute and a former special assistant to President Ronald Reagan.