We created ISIS, we refrained from intervening against Assad and therefore we are responsible for this mess, Ayalon says 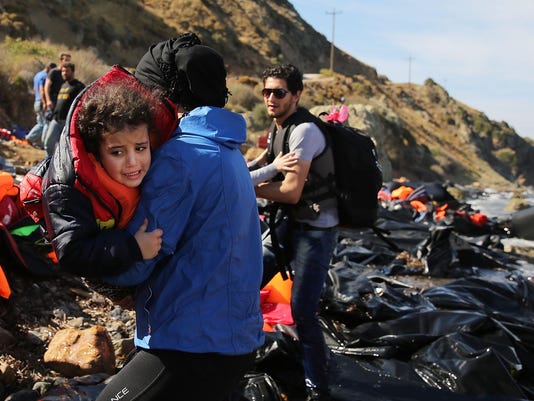 People are assisted moments after they arrive with other Syrian and Iraqi refugees on the island of Lesbos from Turkey on October 14, 2015 in Sikaminias, Greece.(Photo: Spencer Platt / Getty Images)

Every day, we are bombarded with stories about refugees who have escaped the horrific civil war in Syria. There are photos of dead children washing up on the beaches while news stories report how Syrians are fleeing en mass into Europe.

Syria had a population of about 23 million before the start of the war four years ago. Besides the dead and injured, the United Nations says some 3.73 million Syrians — more than four times the population of Indianapolis — have fled the country and officially registered as refugees.

Looking at U.S. involvement in the Middle East since 2003, we must realize that the American government’s actions have led to this avalanche of refugees.

Soon after the Iraq War began, the false promise of democracy led the Americans to support the Shia majority at the expense of the large Sunni minority that had dominated the country under Saddam Hussein. The dissolution of the Iraqi army that followed the U.S. invasion sent 400,000 armed Sunni troops, now unemployed, into the streets, humiliated and angry at America.

This laid the seeds for the insurgency that erupted that summer. In addition to disgruntled soldiers, it included jihadists from neighboring countries who marveled at the opportunity to fight Americans. Images posted online of American soldiers torturing Muslims in Iraq fueled recruitment efforts of radical groups such as al-Qaida.

When the Arab Spring erupted in 2011, American foreign policy appeared undecided, hesitant to support democracy and oppose “friendly” dictators the U.S. has sustained over the years and reactionary regimes whose actions it ignored. In Syria, the absence of proactive American measures from the onset, comparable to those taken in Libya, has de facto allowed Assad to murder a quarter of a million of his citizens in the course of a civil war that has been ongoing for nearly five years. The war, in which numerous groups have been fighting one another and the Assad regime, generated chaos that was jihadists’ finest hour.

By early 2013, al-Qaida-affiliated groups had already controlled substantial parts of Syria. By June 2014, ISIS, a group that emerged but later separated from al-Qaida, had swept through Iraq and Syria, capturing vast areas from the crumbling Syrian and U.S.-trained and equipped Iraqi armies. And yet the U.S. refused to intervene beyond sending a handful of advisers to assist local forces fighting ISIS and bombing from the air. The latter only led to a surge in recruitment for ISIS, as young Muslims flocked into Syria to fight Americans.

After years of war, many Syrians have given up their hopes of returning home and want to leave the Middle East for good. Consequently, Europe has been inundated with refugees.

But the situation in Syria is not Europe’s doing. It should therefore not be Europe’s problem. We created ISIS, we refrained from intervening against Assad and therefore we are responsible for this mess. It is time to take responsibility for it and offer Syrian refugees a safe place to rebuild their lives in the United States.

Yaron Ayalon is an assistant professor of history at Ball State and a Middle East specialist.