Give Judge Merrick Garland a vote

Our courts should be above politics, not an extension of politics

Give Judge Merrick Garland a vote 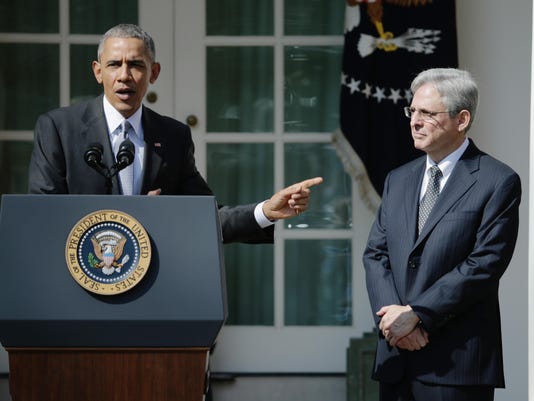 Last week, I nominated Chief Judge Merrick Garland to the Supreme Court. Garland is not simply one of our most brilliant legal minds, but a man renowned on both sides of the aisle for his character, his decency, his ability to build consensus and his fidelity to the law.

Garland grew up in my hometown of Chicago. His mom served as a community volunteer. His dad ran a small business out of their basement. And they impressed upon him the importance of working hard, dealing fairly and serving his community.

As a young lawyer, Garland could have comfortably salted away his years as a partner at a lucrative private firm. Instead, he chose public service.

For the last 19 years, Garland has served on what’s often known as the second highest court in the land — the D.C. Circuit Court of Appeals — including the last three as chief judge. He’s admired for his courtesy, his devotion to family and that civic-minded spirit he learned from his parents.

He’s even served as a tutor for young students at a local D.C. elementary school for the past 18 years.

On the bench, Garland has shown an understanding that justice isn’t simply abstract legal theory; it affects people’s daily lives. So he knows that our courts must preserve liberty and that the powerful and the powerless deserve equal justice under the law.

And in his work, he is widely regarded for his excellence, modesty, even-handedness and ability to bring people together.

For a long time, some Republicans have said as much themselves. During my time as president, one name has come up more than any other in discussions about potential justices, from Democrats and Republicans alike — Merrick Garland.

And back in the 1990s, when he was first nominated to serve on the federal bench, Sen. Orrin Hatch, the Republican head of the Judiciary Committee, said, “In all honesty, I would like to see one person come to this floor and say one reason why Merrick Garland does not deserve this position.”

At a time when our politics are so polarized, we should treat a process of this magnitude — the appointment of a Supreme Court justice — with the seriousness it deserves.

I’ve done my constitutional duty. Now it’s up to each senator to fulfill his or hers. All I’m asking is simply for the Senate to act fairly. To act with the level-headedness and foresight required in our exercise in self-government.

Give Garland a hearing. Give him a vote.

I’m asking people here in Michigan to make your voices heard. Let your senators know how important this is. Tell them that our courts should be above politics, not an extension of politics. Because this is bigger than a few news cycles, or even a single election.

It’s about the integrity of our system of justice. It’s a question of whether we’ll live up to the responsibilities our founders entrusted to us. That’s been the duty of Americans for more than two centuries. And now it’s up to us to carry forward that story for our time.

of the United States.