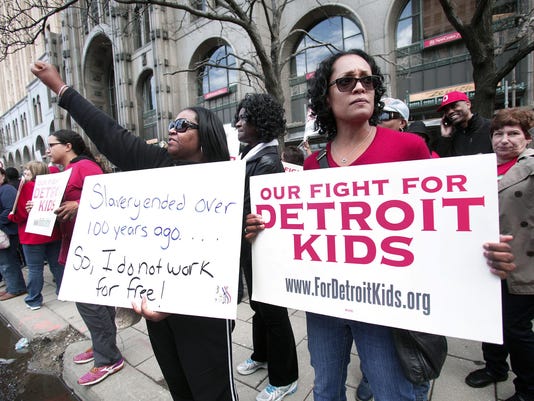 The state Legislature taking action to save DPS may have saved every other school in the state at the same time, Cotter writes.(Photo: Bill Pugliano / Getty Images)

Republicans in the Michigan House of Representatives recently passed a sweeping rescue and reform plan for the troubled Detroit Public Schools system. While this is obviously welcome news for parents, children and teachers in Detroit, this legislation was also critically important for every other Michigan resident because of the looming bankruptcy hanging over the district.

Years of mismanagement have put the district on the brink of failure, to the tune of $3.5 billion in debt. Unlike the City of Detroit’s successful bankruptcy in 2013, virtually all of the school district’s debt is backed by the state — meaning we are all on the hook. Those bills coming due all at once would end public education in Detroit and cripple our state government.

A federal judge could rule during the proceedings that the entirety of the debt must be paid off immediately. The district’s debt is more than one third of our state’s general fund, and paying it out in one fell swoop would create an unprecedented hole in the state treasury.

If, for example, a court order took all of that funding out of the education budget, school districts statewide would see immediate losses of more than $2,000 per student in their annual budgets. Larger school districts in metro Detroit and the Grand Rapids area would lose millions of dollars, and smaller districts in northern Michigan and mid-Michigan would be squeezed. The state Legislature taking action to save DPS may have saved every other school in the state at the same time.

If that court order instead took the funding out of other state spending, we could see even more damage done. From Medicaid services to job training programs, every dollar spent goes to help improve the quality of life of people living in this state.

Completely eliminating the local government revenue sharing that pays for police and fire services for hundreds of our cities, townships, and villages would get less than 10 percent of the needed funding. Wiping out every dollar of state funding from Michigan’s 15 public universities and the State Police combined would only get you a little over halfway there.

Obviously these are all worst-case scenarios, but there are no good options when a court unilaterally takes $3.5 billion out of a budget. A DPS bankruptcy would simply be a nightmare for all of us, and one House Republicans banded together to prevent.

A bankruptcy would first hurt those who can afford it least, throwing 47,000 Detroit students into a great unknown and leaving their future in the hands of a federal judge. Parents and children in Detroit would have woken up one morning not knowing whether their school was open. Those students have suffered enough with corrupt principals and teachers who walk out on the job and the some of the poorest academic performance in the state.

Union bosses and their political allies did not want to see us pass these financial and academic reforms. Many taxpayers in areas outside Detroit wondered why we devoted so many resources to turn around this failed school system, but inaction in Detroit was simply not an option.

Rep. Kevin Cotter, R-Mount Pleasant, serves as the speaker of the Michigan House of Representatives.