1968 and 2016 do have a striking similarity in one sense: Our country seems at war with itself 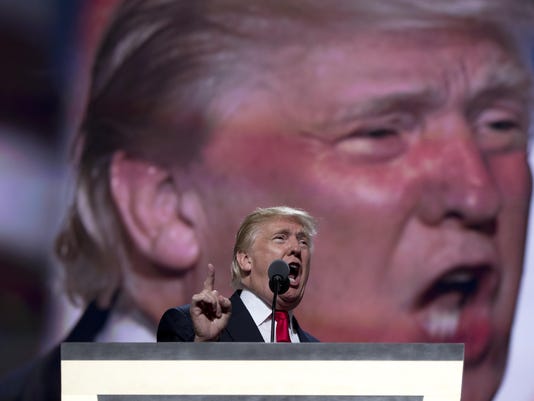 During his dark nomination acceptance speech at the Republican National Convention, Donald Trump uttered the phrase “law and order.”

No, it wasn’t a pop culture reference to the long-running NBC drama series based in New York City. Rather, it’s a reactionary code phrase whose origin dates back to the 1960s.

In fact, Richard Nixon used it during his successful 1968 campaign for the White House amidst a season of urban rebellion in Harlem; the Watts section of Los Angeles; Newark, New Jersey; Detroit; and Cleveland where this year’s Republican Party convention was held.

During his acceptance speech in Miami Beach, Nixon, the Republican Party nominee, stated:

And to those who say that law and order is the code word for racism, there and here is a reply: Our goal is justice for every American. If we are to have respect for law in America, we must have laws that deserve respect.”

Similarly, Trump offered the following during the Republican convention:

“On Sunday, more police were gunned down in Baton Rouge, Louisiana. Three were killed, and four were badly injured. An attack on law enforcement is an attack on all Americans. I have a message to every last person threatening the peace on our streets and the safety of our police: when I take the oath of office next year, I will restore law and order our country.

I will work with, and appoint, the best prosecutors and law enforcement officials in the country to get the job done. In this race for the White House, I am the Law and Order candidate. The irresponsible rhetoric of our President, who has used the pulpit of the presidency to divide us by race and color, has made America a more dangerous environment for everyone.”

In 1968, Nixon attacked the Black Panther Party and organizations like them; Trump has assailed the Black Lives Matter movement. Now, the political and social climate in 1968 and 2016 isn’t completely analogous.

But the two years do have a striking similarity in one sense: Our country seems at war with itself. Paul Manafort, Trump campaign chairman, has stated in recent days that the tone and feel in 1968 are “pretty much on line with a lot of the issues that are going on today.”

White America, certainly the politically conservative wing, is hell-bent on taking back the streets. And by extension, that also means a building wall to keep illegal immigrants off American soil.

To be sure Trump, like Nixon before him, has tapped effectively into a mood among working class whites who see good-paying American jobs going overseas and who are fed up with federal government.

General Election Day is more than 100 days away and a lot of things can happen between now and then. But one thing appears certain: Trump, a demagogue, will play the “law-and-order” card all the way to November.

Ken Coleman is a former communications director for the Michigan Democratic Party.