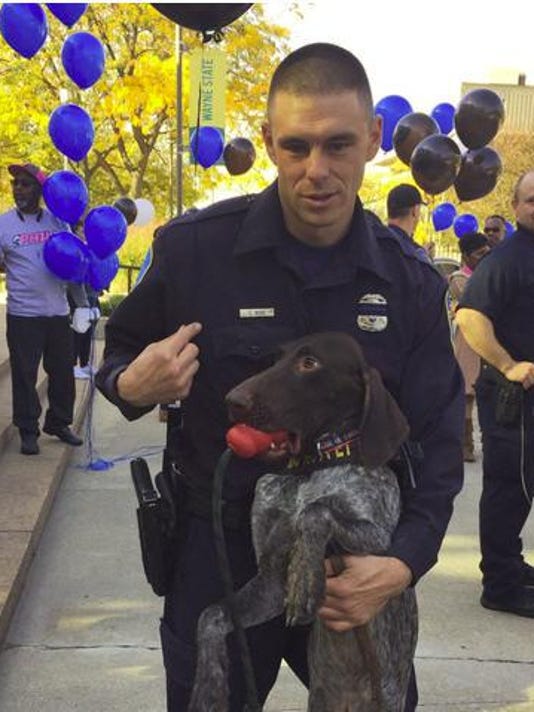 “He was a 24/7 police officer that came in early, stayed late and always had a smile on his face,” recalls Chief Holt.(Photo: Detroit Police Department)

The risks Wayne State officers take patrolling and protecting the surrounding community is tied to the area’s success.

Since becoming chief in 2008, University Police Chief Tony Holt has tripled the size of the force to include 65 officers. Campus safety remains a priority, but Chief Holt has broadened the department’s scope to include a 6.5 square mile area around the campus. It’s an approach few other university police forces have embraced.

“We’re not a law enforcement department competing with someone else,” says Chief Holt. “We’re all on the same team.”

Chief Holt estimates that roughly 85 percent of arrests are not campus-related. Following the first fatal shooting of an officer in the department’s 50-year history, there will be tough questions asked about the department’s expanded role.

What will university administration and possibly the Detroit Police Department have to say about the role of Wayne State police?

As the department reviews policies following the shooting, Chief Holt says he’s prepared to vigorously defend the widened scope of the force and expects to “charge out even harder than before.”

Chief Holt, a 39-year veteran of WSUP, says his department isn’t prepared to “build a fence” as a border between the campus and the city. “We have students and staff that live throughout the area. If you patrol a large area around the campus, it will be safer.”

There’s evidence to defend his approach.

Statistics provided by Wayne State’s Center for Urban Studies show property and violent crimes have decreased by 70 percent since 2008. Auto theft has plummeted by 92 percent. In 2015, BestColleges.com ranked Wayne State as one of the 50 safest university campuses in the nation.

In return, Midtown has emerged as one of Detroit’s safest and sought after neighborhoods boasting an occupancy rate of 97 percent.

“As a community, we knew Officer Rose and we respected him,” says Young, who notes quality of life in the neighborhood has increased with Wayne State patrols.

Young estimates 200 attendees marched from Scripps Park to the site of the shooting. Officers from neighboring departments were in attendance. Young wanted to show how important the department’s police officers were to the community.

Following the vigil, Chief Holt remembered the type of policeman Officer Rose was.

“He was a 24/7 police officer that came in early, stayed late and always had a smile on his face,” recalls Chief Holt. “He had wanted to be a police officer since he was 8-years-old.”

As we mourn Officer Rose, the question isn’t whether or not Wayne State police should be proactively patrolling the community. Instead, we should be asking what Midtown would look like if it didn’t have officers like Collin Rose patrolling the streets.

Ryan Patrick Hooper is a freelance journalist based in Detroit.