Trump’s campaign rhetoric was all talk. He is leading the charge to betray workers and benefit wealthy corporations 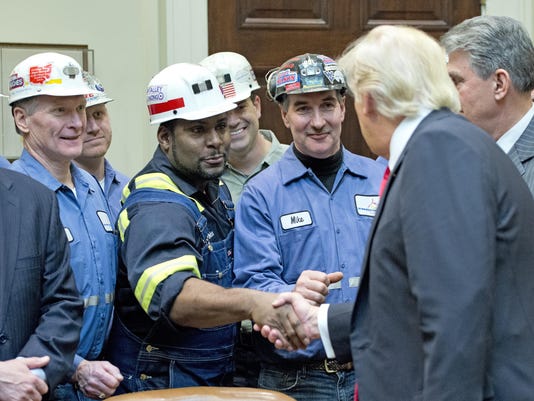 During his campaign, Donald Trump painted himself to be a champion for the American worker, claiming that he would end an era where “our workers’ loyalty was repaid with betrayal” by politicians. If he won, Trump promised that workers would “finally have a president who will protect them and fight for them.”

Now, weeks into his administration, it’s clear that Trump’s rhetoric was all talk. Trump is not fighting for workers’ interests. Instead, he is leading the charge to betray workers and benefit wealthy corporations.

On Monday, Trump signed legislation to repeal the Fair Pay and Safe Workplaces Executive Order. The order, which President Barack Obama signed in 2014, ensured that companies complied with health and safety standards, wage laws and anti-discrimination protections before they received federal contract dollars.

This order would have fixed a major problem: the rampant violation of basic labor laws by companies that receive federal contracts. Sen. Elizabeth Warren, D-Massachusetts, recently released a report finding that two-thirds of the government’s 100 largest contractors have been caught breaking workplace wage and safety laws. Previous reports by the nonpartisan Government Accountability Office and a Senate committee also found widespread lawbreaking by government contractors.

By requiring companies with long records of violations to clean up their acts, the government could have prevented workers from being cheated out of hard-earned wages and even saved workers’ lives.

Workers like Rodney Bridgett. The 35-year-old father of two was working at a beef processing plant across the river from Sioux City, Iowa, when he was crushed by a piece of equipment secured with a faulty chain in 2012. OSHA proposed a penalty of $104,200 against his employer, one of the country’s largest food suppliers, labeling the incident “unthinkable.”

While those penalties were reduced, a Senate committee report found that over a five-year period, OSHA issued penalties against the company in 19 incidents that included chemical exposures, amputations and 11 worker deaths. Just last year, OSHA investigators discovered 15 serious violations at the company’s Center, Texas, chicken processing facility after a worker’s finger was amputated in an unguarded conveyor belt.

Yet, the government continues to pay the company millions of dollars in contracts every year.

Under Obama’s executive order, companies would disclose past violations during the bidding process for federal contracts. The government could then work those with egregious violations to address ongoing problems.

These protections would not only benefit workers but also taxpayers and law-abiding businesses. Taxpayers would see their investments go to better performing companies, as research has shown that 1 in 4 contractors with the worst workplace violations also had significant performance problems, including cost overruns and schedule delays.

Law-abiding businesses would be able to compete fairly without being undercut by companies that fail to pay workers properly or cut corners on safety. Similar processes are increasingly common in the private sector.

Unfortunately, Trump chose to side with big business and sign away these hard-fought worker protections.

Workers and their advocates derailed Trump’s first choice for Labor secretary, fast-food CEO Andrew Puzder — a nominee with a long record of anti-worker statements and actions. And in February, Trump signed an order undercutting protections to require retirement advisers to act in the best interest of their clients, rather than in the interest of Wall Street. If this rule is revoked, America’s families will lose out on an estimated $17 billion of retirement savings each year.

Now that he is president, Trump’s actions serve to benefit the same powerful corporations and financial elites he once spoke out against. Make no mistake: For the workers who supported Trump, their loyalty has been repaid with betrayal.