Column: Preparing for jobs of the future

Column: Preparing for jobs of the future 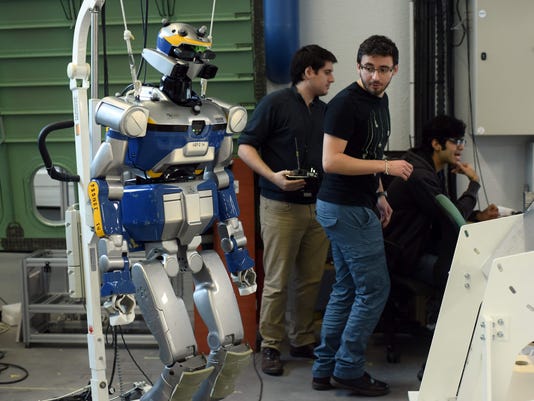 There’s plenty Trump and other leaders can do to prepare our workforce for the future, Shapiro says.(Photo: Remy Gabalda / AFP/Getty Images)

One common thread links tech progress over the last 100 years: disruption. Smartphones replaced landline phones and switchboard operators. Delivery robots are outmaneuvering bike messengers and postal carriers, both of which had displaced the Pony Express.

This kind of disruption is always exciting — but it inevitably comes with challenges, particularly in the job market. We’ve seen this play out in the past several years: Between 2000 and 2010, more than five million jobs disappeared, 88 percent because of automation. And it’s only going to continue — McKinsey & Company estimates nearly half (49 percent) of time spent on work activities could be automated with today’s technology. Two-thirds of Americans expect robots and computers to take over much of the work done by humans in the next 50 years, according to Pew.

We must confront these changes head on, using technology to overcome challenges.

President Trump is taking steps to support the changing workforce, declaring a “workforce development week” and an effort to create apprenticeship programs. These programs, modeled off successes in Germany and the United Kingdom, are designed to prepare the next generation of American workers to fill the skills gap employers face — a record high of six million vacant jobs — focusing on manufacturing, information technology and health care. According to 2014 data, 60 percent of young people train as apprentices in Germany in diverse fields such as manufacturing, banking and hospitality — a stark contrast to less than 5 percent in the U.S.

This initiative is a great start to prepare the country for the economy and new collar jobs of the future.

Additionally, raising the H-1B visa cap will help grow the American economy. Nearly 200,000 international workers applied for 85,000 available H-1B slots in 2017 — a strong indication that our nation’s businesses, large and small, need more talented workers to meet the demands of their growing businesses. There is bipartisan support in Congress to crack down on abusers who are outsourcing American jobs, and Trump’s “Hire American” plan to close loopholes in the H-1B program is a good first step toward addressing the challenges of an evolving workforce. But Congress must also advance meaningful reforms that recognize the critical role highly skilled foreign workers play in growing our economy, creating American jobs and maintaining our nation's competitiveness.

At the same time, we must equip American workers to successfully fill the kinds of jobs that currently go to H-1B applicants. This isn’t simply a matter of on-the-job training — it’s a matter of comprehensive education reform.

The number of available tech jobs has also exploded over the past decade, but companies aren’t getting the workers they need. According to CTA’s Innovation Scorecard, Arizona, Iowa, Massachusetts, Rhode Island and Vermont graduate the most students with STEM degrees per capita — but the U.S. still faces a projected shortage of 223,000 qualified STEM graduates in 2018, a gap in critical talent the H-1B program helps address.

The message is clear: To create the synergy that will drive our nation’s economy and global leadership, we need to equip our workers with the skills companies need — critical thinking, digital literacy and problem solving.

Our military is perhaps our most effective and massive jobs program, training young men and women not only to be mature and responsible leaders, but also to work with and understand cutting-edge technology fields such as cybersecurity, network management and cloud computing. Let’s harness vocational training programs and community colleges to educate and retrain workers, too.

To continue our success and our ability to drive economic growth, we need to build a strong American economy with well-paying jobs. Corporate America must take ethical responsibility and ownership for our national future, rather than measuring ethics by our ability to follow increasingly complex rules and laws.

We can’t know for sure where innovation will take us or exactly what the jobs of the future will look like. But the U.S. technology sector can confront the disruption directly. And we do know that with sensible policies such as those proposed by Trump, our industry can and will lead our nation’s transition to a fully equipped 21st-century workforce.

Gary Shapiro is president and CEO of the Consumer Technology Association.