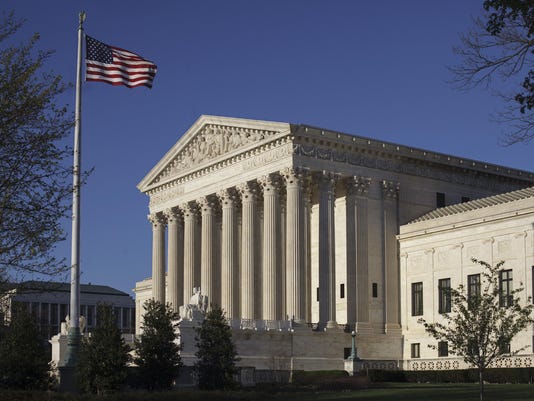 Americans shouldn’t need constant reminding that under the First Amendment, they can say what they want, when they want and to whom they want, no matter how hateful or offensive.

And yet as longstanding as is that principle, the U.S. Supreme Court had to affirm it again this week when it ruled unanimously that an Asian rock band could trademark its name — the Slants — even though it is a derogatory term sometimes used to demean Asians.

The U.S. Patent and Trademark Office had denied the band’s request to register and protect its name, deeming it amounted to hate speech. The office similarly stripped the Washington Redskins football team of its trademark because it is offensive to Native Americans.

The court’s ruling basically upheld the principle that all speech, including hateful speech, is protected by the First Amendment and should not be restricted.

That’s the right call. The obvious danger of allowing the federal government to be the arbiter of free speech is that restrictions are easily manipulated to suit political agendas.

And offensiveness is very much in the ear they beholder. What shocks one person may not faze another.

“The idea that the government may restrict speech expressing ideas that offend … strikes at the heart of the First Amendment,” Justice Samuel Alito wrote. “Speech that demeans on the basis of race, ethnicity, gender, religion, age, disability, or any other similar ground is hateful; but the proudest boast of our free speech jurisprudence is that we protect the freedom to express ‘the thought that we hate.’”

Alito’s opinion provides important clarification for the so-called disparagement clause of federal law, which forbids registration of a trademark that “may disparage ... persons, living or dead, institutions, beliefs, or national symbols, or bring them into contempt or disrepute.”

That’s an overly broad carve-out that, again, relies on subjective interpretations influenceable by the regulator’s own experiences and biases.

It’s not the appropriate role of the government, according to Justice Anthony Kennedy.

“A law that can be directed against speech found offensive to some portion of the public can be turned against minority and dissenting views to the detriment of all,” Kennedy wrote in concurrence. “The First Amendment does not entrust that power to the government’s benevolence. Instead, our reliance must be on the substantial safeguards of free and open discussion in a democratic society.”

There are, of course, marketplace consequences when speech oversteps societal norms and broadly offends. Products can be boycotted and individuals shunned. That’s the appropriate regulator.

This court has been a good friend to the First Amendment at a time when there are many who would shred it to stifle dissent and control the national political debate.

That the Slants opinion came on an 8-0 vote is a powerful affirmation of the foundational right of free speech and its sacred role in a democratic society.