If Sessions goes, Special Counsel Robert Mueller could go next 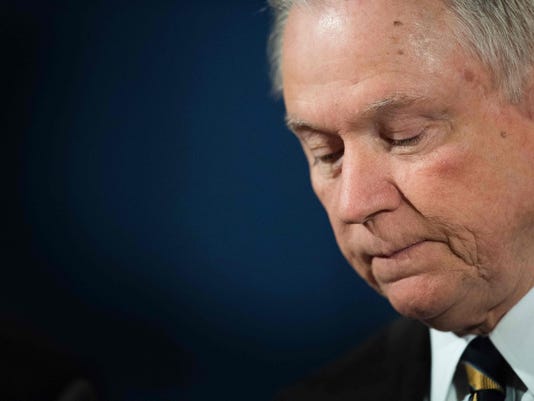 If Attorney General Jeff Sessions, who recused himself from the Russia probe goes, Special Counsel Robert Mueller, who is leading it now, could go next.(Photo: Jim Watson / Getty Images)

President Donald Trump’s withering invective about Jeff Sessions over the last week suggests an effort to pressure the attorney general into resigning with a possible eye toward replacing him and ending the Justice Department investigation into Russian meddling in the 2016 election.

Trump has shown one attorney general the door already, but his January dismissal of Sally Yates had limited repercussions since she was an Obama administration holdover days away from her own departure. The firing or resignation of Attorney General Jeff Sessions could set off a frenzied — and confusing — chain reaction of monumental consequences.

A Sessions ouster would be seen as key to ultimately removing Robert Mueller, the special counsel and former FBI director investigating potential collusion between Russia and the Trump campaign. But Trump, infuriated by Session’s own recusal from the probe, would need to find a new ally in the Justice Department willing to take that step — which may not be easy.

A look at potential scenarios:

If Trump follows Justice Department protocol and his own executive order outlining a succession plan, Deputy Attorney General Rod Rosenstein would immediately become acting attorney general until a permanent successor is nominated and confirmed by the Senate.

That would leave the president, at least immediately, with another attorney general of whom he has been sharply critical. Rosenstein would continue to oversee Mueller’s probe, and there is no time limit on how long he could serve in an acting capacity.

The point person for Mueller’s probe within the Justice Department, Rosenstein has not been spared from Trump’s ire. Trump lashed out at him in a New York Times interview last week, suggesting he couldn’t be a loyal Republican if he’s from Baltimore, even though he actually grew up outside of Philadelphia, and claimed that he had a “conflict” in the case since he wrote a memo that preceded the firing of FBI Director James Comey.

Rosenstein has steadfastly said he would not fire Mueller unless there were legitimate grounds to do so. He has said he won’t follow any orders he doesn’t believe are lawful or appropriate, suggesting that he’d be prepared to resign if Trump demanded that he fire Mueller.

Unlike Sessions, the first senator to endorse Trump, Rosenstein and Trump had no pre-existing relationship and there’s no reason to think the president would rather have him lead the Justice Department.

Rosenstein, who cultivated an image as a straight-arrow prosecutor who served under presidents of both political parties, also may see standing up to the president as a chance to salvage a reputation hobbled by his role in Comey’s firing.

Under the department’s line of succession, if Sessions and Rosenstein were to both leave, the acting attorney general slot would then be filled by Associate Attorney General Rachel Brand.

Trump could invoke his authority under the federal Vacancies Reform Act to select someone other than Rosenstein to lead the department on an interim basis provided that person is already Senate-confirmed, which could include a Cabinet member or a top Justice Department official.

Such appointments have 210-day limits, and it’s not clear that statute can be used when the previous officeholder is fired. A person picked under the act could not also be named as a permanent successor, according to an online post by Stephen Vladeck, a University of Texas national security law professor.

If Trump opts for someone other than Rosenstein, that selection would have enormous import because the pick — barring a conflict similar to the one Sessions had — would assume oversight of Mueller’s investigation. There’s nothing in the regulations that set up Mueller’s appointment that would seem to bar an acting attorney general from firing a special counsel for misconduct, conflict of interest or dereliction of duty.

“Whoever is acting as attorney general has the authority to fire Mueller,” said Josh Blackman, a South Texas College of Law professor.

If the Senate formally recesses for 10 days or more, Trump can appoint someone of his choosing to be attorney general until the end of the next Senate session in January 2019, Vladeck said. And Trump’s pick wouldn’t need Senate confirmation to step into the role, theoretically allowing the president to select someone amenable to firing Mueller.

The length of an August recess remains up in the air anyhow, because Trump has insisted that senators not leave town without sending him some kind of health overhaul bill to sign.

“Many Americans must be wondering if the president is trying to pry open the office of attorney general to appoint someone during the August recess who will fire Mueller and shut down the Russia investigation,” Schumer said Tuesday. “Before this scheme gains wings, Democrats will never go along with a recess appointment. If that situation arises, we have some tools in our tool box to stymie such action.”

Democrats could filibuster the Senate recess and try to force Republicans to conduct short, pro forma sessions with no business conducted once every three days. That would bar the president from making recess appointments.