Bankole: Is Mackinac conference all talk and no action?

Conference has taken on some big policy issues, but they rarely come to fruition

Bankole: Is Mackinac conference all talk and no action? 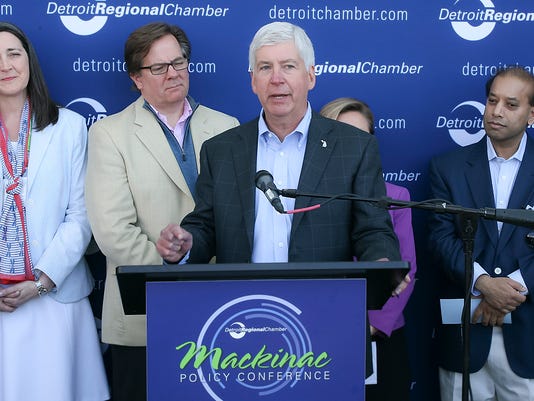 When donors donate to a nonprofit, they want to know the impact of the contribution.

When investors put money in a project, they want a return on investment.

When government budgets for a project, the outcome is measured in terms of whether quality of life has improved for people.

So as Michigan’s business and political elites spend time once again this week on Mackinac Island for the Detroit Regional Chamber’s annual policy meeting, the question is: What will be the outcome?

Because in the past the conference has taken on some big policy issues that determine quality of life for Michiganians, but they rarely come to fruition.

Take, for example, the vexing issue of regional mass transit, which has dominated conversations on the island for almost two decades. Despite the growing need for a comprehensive regional transportation system, the issue has remained a dream unfulfilled.

The issue has returned as the talk of the island. That alone leads to another question: Is the gathering here a matter of routine, perspective or relevance?

“I think it’s perspective," says local Detroit developer Marvin Beatty, who has been attending the conference since 1998. "This conference does more for the individual than it does for the overall mission of addressing policy issues.”

For Beatty, the Mackinac meeting is a “lot more conversation than cure. I think people should see it that way."

As one who has been covering Mackinac for more than a decade, I find the four-day gathering on the island is almost a political ritual. It is also like a TEDx forum for politics, where you hear inspirational speeches from a select group of elected officials, some of whom later won’t move an inch to implement what they promised on the island.

“I love it here. I think it gives you access that you won’t normally get. Not everything gets resolved on the island, but it gives you a forum to have a healthy dialogue,” said Linden Nelson, CEO of Nelson Ventures.

Nelson, who is marking his 10th attendance at the conference said, “I realize that through dialogue you can accomplish things.”

Despite debate about the impact of being hidden on an island each year with the top political and business leaders, Bob Riney, president of health care operations and chief operating officer at Henry Ford Health System, sees it as an initiation for hospital administrators.

“This year we have a couple of new executives at Henry Ford," said Riney, who has attended Mackinac for 15 years now. "For them this conference is an incredible orientation in meeting the leaders of the region.

“For those of us who have been coming here a long time, the tighter the agenda, the more meaningful and impactful the conference is,” Riney said. “But if there are too many topics as opposed to a coordinated theme, then we leave here with little bits of information and not necessarily some marching orders.”

Colleen Peters, a nonprofit consultant who has been participating in the policy meeting for the last 16 years, says it should be regarded as an opportunity to talk to people about real issues.

“We have to do a much better job to engage each other. At this point in our politics we need to dialogue now more than ever,” Peters said. “If we are not talking to each other we will be talking against each other.”

Yes, the conference can be a cross-pollination of ideas. And after all these years, it should be judged based on its outcome.

Sandy Baruah, president and CEO of the Detroit Regional Chamber, has described the conference as “Michigan’s management seminar.”

If that is the case, management is also about outcome and objectives.

“This year’s conference centers around three program pillars: Trust, Is Michigan Prepared? and the Mobility Disruption. These three focus areas help guide the dialogue on the island and should set the tone for continued conversations over the next year,” Baruah said recently.

If the leaders meeting here do not move with all deliberate speed to put their differences aside and tackle a major quality of life issue like regional transit once and for all, then many will continue to view the Mackinac Policy Conference as nothing but a feel-good retreat of the elites.