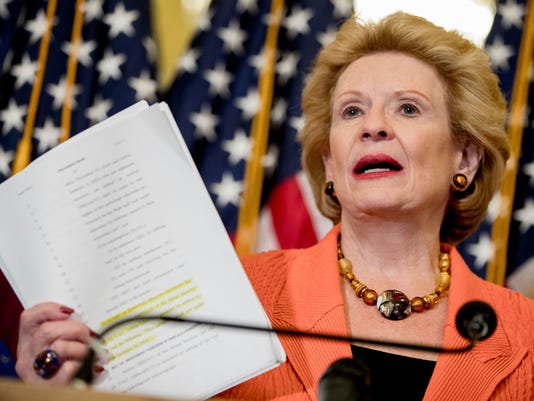 Stabenow writes: "Unfortunately, Judge Kavanaugh’s record and his writings too often have gone against what is best for Michigan families."(Photo: Andrew Harnik, AP)

I was born in Michigan. I have lived here my whole life. My children and grandchildren are proud Michigan residents.

Every decision I make in the United States Senate puts the people of Michigan first. And the decision to oppose Brett Kavanaugh as the next United States Supreme Court justice is no exception.

Unfortunately, Judge Kavanaugh’s record and his writings too often have gone against what is best for Michigan families. When confronted with cases that have special interests on one side and people on the other, he has consistently sided with the special interests.

That’s certainly true when it comes to health care.

Health care isn’t political — it’s personal. Michigan families know what they need: quality, affordable health care, including prescription drugs. And women need to know they will be able to continue making their own reproductive health decisions.

Right now, there is a case where the Trump Administration is refusing to defend the law that protects people with pre-existing conditions — people like Amy, a small-business owner with chronic leukemia, and Louisa, a beautiful little girl who was born with half a heart.

Half of Michigan families include someone with a pre-existing condition like heart disease, asthma or diabetes. They deserve to know that health care will be there when they need it.

Yet if this case were to come before the Supreme Court — and Kavanaugh were a member — he could likely cast the tie vote. And given his past decisions and comments, Michigan families would very likely find themselves with no coverage and no care.

We need judges who will make decisions based on what’s best for people, not drug companies and insurance companies.

A second issue on the minds of Michigan families is our water and the Great Lakes.

Just ask the people of Flint who still struggle with lead in their water. More recently, the residents of Parchment can’t drink or cook with the water that’s coming from their taps because it’s contaminated with PFAS, an industrial chemical that’s been linked to cancer and other diseases. And Parchment isn’t alone – more than 15 Michigan communities are dealing with PFAS contamination.

Yet again and again, Kavanaugh has ruled on behalf of the polluters, not the people. In one case, he argued that the Environmental Protection Agency exceeded its authority by trying to address pollution from one state that drifts into another state. The Supreme Court voted 6-2 to overturn his decision.

We need judges who will protect our air and water and people — Michigan’s most precious resources.

Finally, I am deeply concerned that of all the choices President Trump had for this position, he chose the one person who has made it clear that he believes in unlimited presidential power.

In 2016, when asked what single case he’d like to see overturned, Kavanaugh said he would like to “put the final nail” in a three-decade-old Supreme Court decision that said independent counsels investigating the president are constitutional.

Kavanaugh has also written that if a president doesn’t like a law, he can simply decide that it’s unconstitutional and refuse to enforce it.

That might be how things work in Russia, North Korea and Syria. It’s not, however, how things are supposed to work in America.

Our founders created our democracy with three branches of government. And the courts ultimately decide what is constitutional — not the president.

We need judges who will ensure that no one — not even the president — is above the law.

From health care, to safety in the workplace, to water and air pollution, to the right to vote, Supreme Court decisions have a real impact on Michigan families. Brett Kavanaugh is the wrong choice for Michigan.