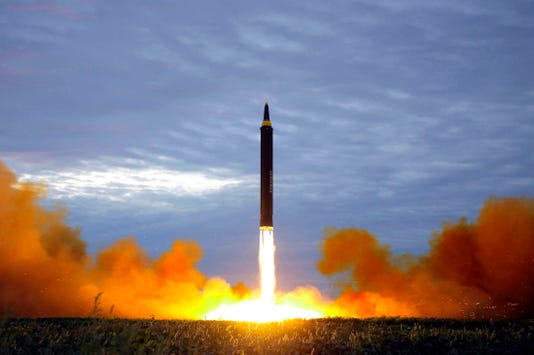 Germans are losing their trust in America’s security guarantee.  Believing that U.S. troops would always defend Europe, Berlin allowed its military outlays and capabilities to wither.

For years Washington officials whined about Europe’s and especially Germany’s failure to treat defense seriously. Yet the U.S. continued to spend money and deploy troops to “reassure” its allies, giving them less incentive to do more. Despite his tough rhetoric, in practice President Donald Trump’s policy is the same.

Nevertheless, his hostility and unpredictability set him apart from his predecessors. Thus, many Germans and other Europeans worry that he might walk away from NATO.

Last year Germany’s Chancellor Angela Merkel called on Europeans to “take our fate into our own hands.” Other Germans want to do even more.

For instance, a couple weeks ago the Welt am Sonntag ran an article by political scientist Christian Hacke, which argued that Germany no longer was under America’s nuclear umbrella and “National defense on the basis of a nuclear deterrent must be given priority in light of new transatlantic uncertainties and potential confrontations.”

Jim Townsend, a one-time deputy defense secretary, responded: “Trump notwithstanding, the U.S. nuclear guarantee is not going anywhere.” That is, of course, the conventional wisdom in Washington, D.C.

The same question also has arisen in Asia. The Republic of Korea had a nuclear program in the 1970s, but abandoned the effort under U.S. pressure. However, in recent years the North’s nuclear advances fed popular support for a South Korean bomb. A poll found two-thirds of South Koreans in favor and some newspapers and politicians offered their support.

The issue is even more controversial in Japan. The public opposes the idea, but an increasingly burdened America may tire of protecting its wealthiest ally.

During the conservative nationalist Shinzo Abe’s earlier stint as prime minister he appeared to offer indirect support for a Japanese nuclear weapon, though nothing came of that gambit. In April 2016 Abe observed that the Japanese constitution does not preclude the country from possessing and using nuclear weapons.

Most U.S. policymakers dismiss the idea of friendly Asian proliferation. But both countries are nuclear capable and could develop their own weapons if they desired.

Uncle Sam has been profligate in distributing nuclear umbrellas. The presumption is that America’s commitment is costless since it will never be called, making non-proliferation one of foreign policy’s great sacred cows.

However, the U.S. has yet to face down an aggressive adversary advancing what it believes to be vital interests and willing to test Washington’s willingness to risk nuclear war over more modest stakes.

The promise to use nukes on behalf of another nation costs nothing only so long as deterrence holds. However, history is full of conflicts in which conventional alliances failed to prevent war. World War I and II are prime examples.

A nuclear guarantee that did not deter would force either military action likely to result in destruction of the American homeland or humiliating retreat and consequent loss of credibility as well as honor.

Doug Bandow is a Senior Fellow at the Cato Institute. A former Special Assistant to President Ronald Reagan, he is author of Foreign Follies: America’s New Global Empire.