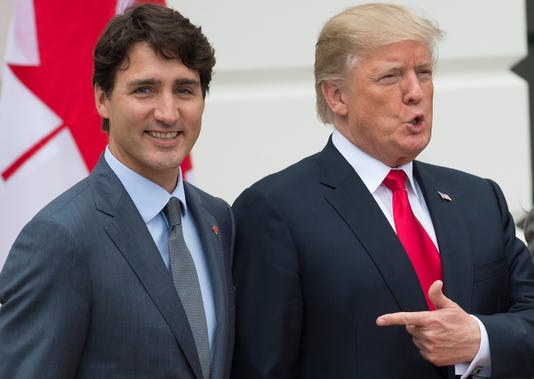 Even though Canada is our close neighbor, Americans often forget that the 37 million Canadians represent a substantial portion of the customers for goods and services provided by America's businesses. In fact, Canada is by far America's largest export market.

The U.S. exports more to Canada's relatively small population than to all the people living in China, Japan, Germany and France combined. That's more than 1.6 billion people. Put another way, on a per capita basis, Canadians buy eight times more American products than vice versa.

Any way you cut it, Michigan is at the epicenter of U.S.-Canadian trade. More than $100 billion a year in U.S. goods enters Canada via Detroit's Ambassador Bridge and through Port Huron. Michigan now exports nearly 15 percent of the state's annual production of goods and services to Canada. As Michigan's largest export market, Canada remains crucial for the success of Michigan businesses and workers.

While not perfect, the North American Free Trade Agreement has been instrumental in facilitating the growth of not just Michigan businesses, but for businesses all around the country. Indeed, 11 million American jobs and more than 125,000 small businesses depend on access to Mexican and Canadian markets and established supply chains with our neighbors to effectively compete in the global economy. More simply, we all depend on NAFTA.

Withdrawing from this important agreement would be a colossal mistake resulting in a 21 percent reduction in exports to NAFTA partners jeopardizing 50,000 jobs in Michigan.

Given these stakes, a NAFTA 2.0 must remain trilateral to allow U.S. businesses to continue accessing customers in their two largest export markets. A deal with Mexico alone won't cut it for Michigan families — Canada must be included.

President Trump is right to re-examine the agreement. After all, there have been tremendous technological, economic and geopolitical advancements since 1994 when NAFTA was implemented.

Specific updates to the agreement should include provisions that promote e-commerce and digital trade, strengthen investment and intellectual property protections and help small- and medium-sized businesses gain access to Mexican and Canadian markets. Modernizing NAFTA to eliminate these and other barriers to trade will promote continued growth in Michigan and throughout the U.S. Walking away from a trilateral NAFTA, however, would undermine the benefits of the agreement and lead to painful economic consequences.

The goal during the negotiations should be to update and modernize NAFTA by pursuing policies that strengthen the agreement and its trilateral structure, not weaken it. To do that trade negotiations need to be conducted with mutual respect. New tariff threats are counterproductive to securing new opportunities for U.S. businesses and workers.

Canada is far more than a trading partner and the biggest customer for American products. From Juno Beach at D-Day to the mountains of Afghanistan, Canada has been — and remains — a close American ally.

That's why the Trump administration must maintain and modernize a trilateral NAFTA. Doing so not only secures economic benefits across the U.S. and cements our mutually beneficial relationship with Canada, but also sets the table for the U.S. to work with Canada and other allies to achieve broader trade policy goals, like tackling unfair Chinese trade practices with a unified front.

Bill Lane is executive director of Trade For America.