Bull writes: "Only acts like shooting or taking eggs of a protected bird will now be prosecuted. This change in MBTA will leave species in peril." 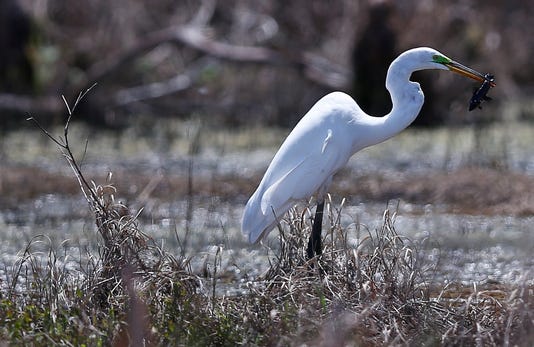 Bull writes: "Only acts like shooting or taking eggs of a protected bird will now be prosecuted. This change in MBTA will leave species in peril."(Photo: Brynn Anderson, AP)

One hundred years ago the Migratory Bird Treaty Act (MBTA), one of our earliest and most effective conservation laws, was enacted to implement a treaty with Canada and has now expanded to Mexico, Japan and Russia. It currently protects over 1,000 native bird species, including over 300 which spend part of the year in the Detroit area including common terns, Kirtland’s warblers, saw-whet owls, and 10% of North America’s canvasback ducks. In recognition of the MBTA’s centennial, National Geographic, National Audubon, and Cornell Laboratory of Ornithology have designated 2018 “The Year of The Bird.”

Before MBTA species like great egret, snowy egret and wood duck, which either refuel or nest in southeast Michigan, were almost hunted to extinction for feathers to adorn lady’s hats — this issue spawned the Audubon movement.

The MBTA prohibits killing; taking nests or eggs; possessing, importing or exporting of any native migratory bird or their parts without a permit, with an exception for regulated hunting of designated game species.

Today the threats to migrating birds on their already perilous journeys are different: 175 million are killed by power lines, 6.8 million by communication towers, up to 1 million by uncovered oil waste pits, and up to 350,000 by wind turbines. Oil spills have also taken a heavy toll. These are termed “incidental takes or killings.”

In recent years, the U.S. Fish and Wildlife Service (USFWS) has used the MBTA to reduce these incidental takes. As good environmental stewards many in industry follow advice from USFWS and Audubon, voluntarily instituting best practices to prevent incidental killings. But some are not such good actors.

Despite repeated warnings and advice on how to avoid avian casualties, negligence by a Wyoming wind energy company killed 14 golden eagles and 149 other protected birds. They were prosecuted under MBTA and pleaded guilty. Most companies now cover oil pits to prevent them from killing birds which mistake them for open water, land in them and die, but a recalcitrant few that have refused to heed warnings have also been fined.

It is only when companies fail to adopt common sense practices after repeated warnings that the MBTA is used by USFWS to secure compliance.

The MBTA also provides an important incentive for companies to implement best practices in the first place. However, under proposed HR 4239 and under a recent reinterpretation of the MBTA by Secretary of the Interior Ryan Zinke, the USFWS will no longer prohibit incidental takes, thus allowing rogue businesses a free pass to kill birds with practices that endanger them but are not deemed “purposeful” killings.

Only acts like shooting or taking eggs of a protected bird will now be prosecuted. This radical change in MBTA implementation will leave many species in peril. If this interpretation had been in effect in 2010, BP could not have been held liable for the deaths of millions of water birds killed by the Deepwater Horizon oil spill.

Protecting birds and the environment we share should not be a partisan issue, but a bipartisan commitment to future generations and to the creatures, like native bird species, who have no voice in this battle but our own.

James N. Bull is president of the Detroit Audubon Society.