Opinion: Obama reminds us why Trump is president

Harsanyi writes: "None of Trump's actions thus far rise to the level of any of these Obama attacks on free expression. "

Opinion: Obama reminds us why Trump is president 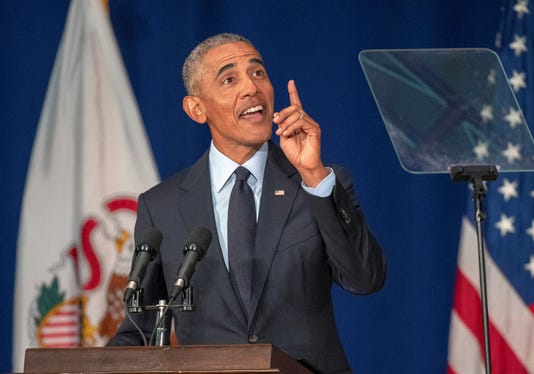 Harsanyi writes: "None of Trump's actions thus far rise to the level of any of these Obama attacks on free expression. "(Photo: Stephen Haas, AP)

"How hard can that be? Saying that Nazis are bad," former President Barack Obama asked a crowd in Illinois last week. Well, probably no harder than saying the words "radical Islam," I imagine. Or maybe it's slightly less difficult than not sending billions of dollars to Holocaust-denying terror regimes that have both the means and intent to murder Jews — in 2018, not 1942. And it's definitely a lot easier than not meeting, posing, and then smiling for a picture with Louis Farrakhan. But thanks for the lecture.

Obama may well find the presence of a few hundred pathetic white supremacists more perilous than a deadly worldwide ideological movement with millions of adherents. But just as Obama's sins do not excuse President Trump's inexplicable answer to the Charlottesville riot, Trump's words don't excuse the most divisive modern president, a man whose unilateralism and contempt for the process and the Constitution helped create the environment in which Americans now find themselves.

While Obama's self-reverential speech was crammed with revisionism, the most jaw-dropping contention from the former president was probably a defense of his record on free speech: "I complained plenty about Fox News," the scandal-ridden Obama explained, "but you never heard me threaten to shut them down, or call them 'enemies of the people.'"

That's the thing. We often hear Trump's hyperbolic, and sometimes destructive, attacks on the press. Thankfully, as of yet the president hasn't applied the power of the state to inhibit anyone's free expression. And this is no thanks to liberals' eight-year efforts to empower the executive branch — when that was useful to them.

It's worth remembering that it was Obama who called out the Supreme Court during a State of the Union speech for defending the First Amendment in the Citizens United case, and his allies still argue the state should be able to ban political documentaries — and, yes, books. Let's also not forget Obama's Internal Revenue Service admitted to, and then apologized for, cracking down on conservative political groups. It was the Obama administration that blamed the Benghazi attack on free speech, apologizing to tyrannies for the excesses of free expression, and then, for good measure, threw the amateurish filmmaker behind "The Innocence of Muslims" into jail.

Most of all, let's not forget that Obama did a lot more than complain about Fox News. The administration was so preoccupied with the cable news network (the only major station that could reasonably be seen as the opposition) that top-ranking administration officials like Anita Dunn, Rahm Emanuel and David Axelrod all engaged in a concerted effort to openly delegitimize its coverage.

That was unprecedented, but OK. Less OK, though, was that not long after that effort, Attorney General Eric Holder decided to spy on a Fox journalist — shopping his case to three separate judges, until he found one who let him name reporter James Rosen as a co-conspirator in a crime of reporting the news.

We also know that the administration spied on Associated Press reporters, although the scandal received only a fraction of the coverage afforded an average Trump hyperbolic tweet. Is it any wonder that many of us view the panic-stricken reaction to everything Trump does as contrived and hypocritical?

None of Trump's actions thus far rise to the level of any of these Obama attacks on free expression. Not a single person has been prevented from reporting the news and leveling any criticism he desires. If anything, the policy positions and Supreme Court picks of the administration have strengthened First Amendment protections.

Yet the idea that the president of an administration that engaged in what the AP itself called a "massive and unprecedented intrusion" on journalism would be brazen enough to give us one of his moralistic lectures on free expression is predictable. Obama always plays by a different set of rules. These are the kinds of attacks that pushed many voters to find someone "who fights."

"Democrats aren't just running on good old ideas like a higher minimum wage, they're running on good new ideas like 'Medicare-for-all,'" Obama noted. If "Medicare-for-all" is such a great idea — which I suppose means Obamacare is a failure — why did Democrats spend every drop of political capital unilaterally shoving a wide-ranging national restructuring of a vital part of the economy through the system? Anyone who argued at the time that Obamacare was merely a step toward a broader socializing of medicine was immediately called a liar by professional fact-checkers, a racist by Democrats, and an accessory to murderer by activists.

You remember the comity of the Obama years, right?

The former president's haughty finger-wagging reminds us that the Trump presidency is, in big part, a manifestation of the resulting fracture from the systematic destruction of process and subversion of political standards by Obama's administration and its allies.

David Harsanyi is a senior editor at the Federalist and the author of the forthcoming book "First Freedom: A Ride Through America's Enduring History With the Gun."