Opinion: 'Bring us together' resounds again

Shribman writes: "Somehow the eloquence of that sign lives on, though seemingly all the more unattainable."

Opinion: 'Bring us together' resounds again 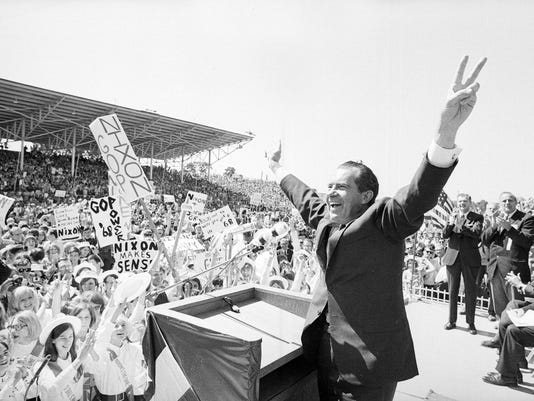 In this Sept. 19, 1968, photo, then-presidential candidate Richard Nixon flashes the victory sign as he acknowledges cheers from the crowd, at the fairgrounds of Springfield, Mo. Theres little doubt Nixon was up to dirty tricks before his presidency ever began. Documents released by the Nixon Presidential Library add weight to existing evidence that his 1968 presidential campaign tried to sabotage Vietnam peace talks before the U.S. election.(Photo: AP)

This is a column about a 13-year old girl, a placard she picked up from the ground, a presidential campaign, a poignant American speech, and a message for the ages. It occurred at town planted at a railroad crossroads in Ohio with a population under 2,000 in a time long ago and yet very much like our own. It is 50 years old this week and as fresh as the ads in the Sunday newspaper.

It is the story of Vicki Cole and Richard Nixon, one now the superintendent of schools in Van Wert, Ohio, the other the former president of the United States. The collision of the two, now forgotten but a vital part of our national story, occurred at a whistle-stop political event in one of the closest, most contentious and portentous presidential elections of modern time. Ms. Cole knew virtually nothing about American politics and Mr. Nixon knew virtually nothing about Deshler, Ohio, except for the fact that the village, 53 miles southwest of Toledo and barely 2 square miles, had two rail lines and sat in a critical swing state.

Mr. Nixon was in a brutal three-way presidential race and Ms. Cole was in the eighth grade at Deshler Elementary. Over the intercom came the announcement that anyone who wanted to be a Nixonette should report to the fire station, where the ladies of the local Republican Club made signs and handed the girls paper dresses and little styrofoam hats. Vicki took one of the placards because she thought it would get her to the front line when the Nixon train stopped the way earlier whistle-stop trains carrying Al Smith, Harry Truman, Dwight Eisenhower, and Barry Goldwater had stopped.

‘’We figured if Nixon got elected we could say we saw the president,’’ she recalled the other day. “I didn’t care about politics. I just wanted to be with my friends.’’

So the train pulled into Deshler much like the great Baltimore & Ohio engines had for decades. There was a rush to the platform, and Vicki moved toward it, carrying a sign saying Lyndon Johnson had made her a Republican, though she hardly knew what that meant. In the confusion and excitement, amid the wind and the dust, she dropped her sign.

What the heck: Right there, on the ground, was another sign, and she picked it up. It said: ‘’Bring Us Together Again.’’

Those four words (later shortened to three, the ‘’again’’ vanishing from speech drafts and from history) would resonate through the rest of the tumultuous campaign year—marked by civil-rights and Vietnam war tensions— and through much of the Nixon era. The candidate’s friend saw the sign, alerted Nixon speechwriter William Safire, and those words appeared in the candidate’s remarks at the next stop and later at Madison Square Garden.

That wasn’t the end of it. When Nixon defeated Vice President Hubert H. Humphrey and former Gov. George C. Wallace of Alabama, the president-elect made these remarks:

"I saw many signs in this campaign, some of them were not friendly; some were very friendly. But the one that touched me the most was one that I saw in Deshler, Ohio, at the end of a long day of whistle-stopping. A little town. I suppose five times the population was there in the dusk. It was almost impossible to see, but a teenager held up a sign, "Bring Us Together." And that will be the great objective of this administration at the outset, to bring the American people together."

We know of course that Nixon, who had rolled through Deshler in his unsuccessful 1960 campaign against John F. Kennedy, never really saw that sign in his return visit in October 1968. That doesn’t matter. ‘’Bring Us Together’’ became the leitmotif of the early Nixon years, when he was riding high and before the sense grew that the 37th president, who carried Deshler (and all of Ohio) in 1968, couldn’t bring anyone together except perhaps a grand jury.

‘’The thing about that sign that is so puzzling is that Nixon often spoke in public in such an uplifting fashion, but in private spoke and acted in such a different way,’’ said Timothy Naftali, former director of the Richard Nixon Presidential Library and Museum. ‘’It is a mystery to historians and biographers who have trouble reconciling the two.’’

Nixon’s Democratic rivals saw that divergence and pounced on it, using the ‘’Bring Us Together’’ phrase to taunt the president from Capitol Hill. By the time Nixon resigned, in August 1974, the story of Vicki Cole had been forgotten.

But Vicki Cole, now Vicki Brunn and with two grown children and four grandchildren living in Nixon’s Southern California, has not forgotten. Today she worries that the sentiment she carried in her hand and that Nixon carried into history may itself be forgotten.

‘’It’s a real disappointment,’’ she said. ‘’We are so split as a country. I have friends and relatives who fall on both sides, some with Trump, some very much against Trump. It’s difficult even to have civil conversations these days.’’

The girl with the sign is now 63 years old, with a distinguished career in public education. She was an award-winning high school social studies teacher and a high school principal and now is a veteran school superintendent. When she headed the Central Local Schools District in Ohio, the district’s middle school was named a National Blue Ribbon School for Gap Closing and was honored with the Momentum Award from the Ohio Department of Education.

That is how life goes on after a blast of celebrity that included an invitation to the Nixon Inaugural, where she rode in a float and attended a ball. But somehow the eloquence of that sign lives on, and in our age, when all the forces of politics conspire to bring us apart, its message is all the more powerful, though seemingly all the more unattainable.

‘’We all would like that sentiment to return,’’ said the girl with the sign, now an accomplished educator. ‘’I can’t imagine anyone wouldn’t. We are more divided now than then. I can’t remember anything like this.’’ Oh, yes she can.

David Shribman is executive editor of the Pittsburgh Post-Gazette.